The twelfth such release in this new series is entered below [Some E.D. standard edits have been applied, in the version presented below, to the direct transcript of our co-founder’s discourse].

“...Perhaps the starkest way to portray the difference -- even the ‘opposite-ness’ -- of the original Boolean algebra in relation to our ‘contra-Boolean’ algebra, is this:

“In Boolean logic, there is no reconciliation of specific opposites, or of opposition-in-general. “

“The product of two opposites produces precisely NOTHING, 0 -- a ‘‘‘lose-lose situation’’’ in which both “sides” are lost --

which is also the Boolean expression of Aristotle’s ‘‘‘Law of NON-Contradiction’’’;

This expression also algebraically implies that --

-- which is algebraically equivalent to --

-- which is Boole’s “Fundamental Law of Thought”, or “Law of Duality”.  It
implies that logical NON-linearity reduces immediately to absolute linearity.
There is no ‘expanded reproduction of ideas/memes’ modeled here.
For Boolean logic, there is only the ‘‘‘simple reproduction’’’ of ideas/categories        /classes
[‘Boolean ‘‘‘self-(s)election’’’ is gainless’].”

modeling a qualitatively expanding reproduction of [ideo-]ontological categories, via the second term on this equation’s Right-Hand Side, Delta x, as well as conserving the Boolean moment via the recurrence of the x variable as the first term, also on the Right-Hand Side of this equation.  The product of categorial opposites always possibly yields, again, yes, the ‘‘‘simple reproduction’’’ of those opposite categories as free-standing, unreconciled opposites, but also, plus [+], a possible reconciliation, a ‘‘‘synthesis’’’, or ‘‘‘complex unity’’’, of the two thus become one, a <<tertium quid>> category-unit named --
q       Delta x; x. 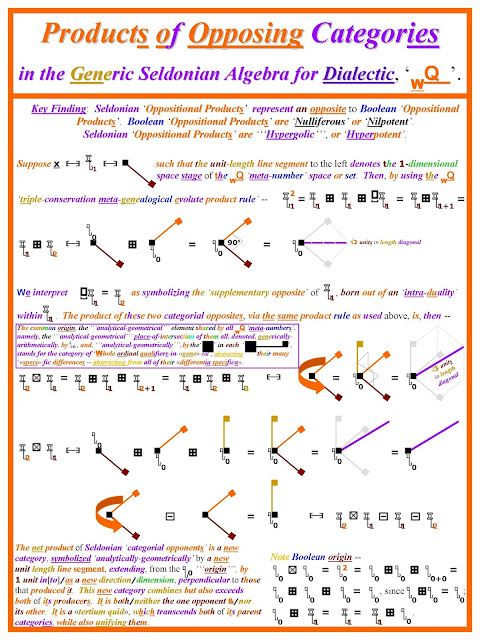 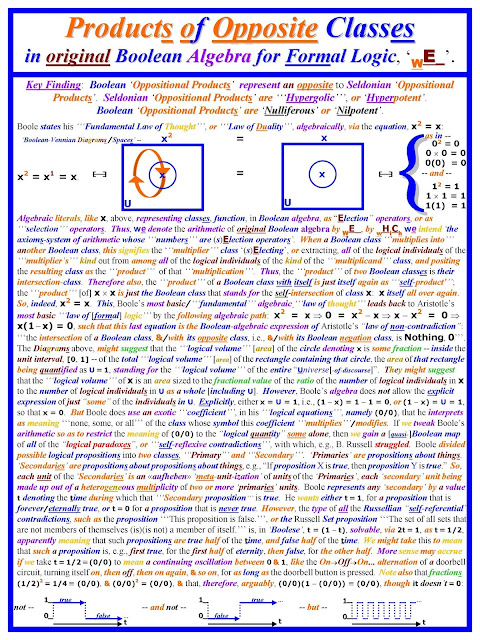 Hegel wrote, in Part I [The Science of «Logik»] of his Encyclopaedia of the Philosophical Sciences, as follows, regarding the ‘‘‘numerology’’’ of the rational [«vernunft»] division of contents, or of ‘‘‘subject-matters’’’, in the “philosophical sciences” -- “Any division is to be considered genuine when it is determined by the Concept.  So genuine division is, first of all, tripartite; and then, because particularity presents itself as doubled, the division moves on to fourfoldness as well.” [G.W.F. Hegel, The Encyclopedia Logic, translated by T.F. Geraets, W.A. Suchting, and H. S. Harris, Indianapolis:  Hackett Publishing Company, Inc., 1991, p. 298, §230, Addition [«Zusätze»]].

While we of Foundation Encyclopedia Dialectica [F.E.D.] in no way wish to claim any Hegelian orthodoxy for any of our work, let alone to import any of Hegel’s ‘‘‘massive’’’ mystifications into that work, we call attention, here, to the passage above, because of certain resonances between Hegel’s description, in that passage, of his version of dialectical «diairesis» [ontological-categorial division, per Platon], and some recent results of our ongoing research into possible alternative axioms, for Seldonian ‘dialectical algebras’, that go beyond our classical ‘‘‘Seldon Functions’’’, dyadic and triadic alike, in their efficacy for ‘dialectical meta-modeling’.

Those recent results center upon what we are provisionally calling ‘The Hegelian Triadic-Tetradic Product Rule’, which is showing signs of more apt ‘dialectical meta-modeling’ with regard to a certain super-Domain of dialectical instances, both at the ontological-categorial level, e.g., at the «species-arithmos» level, and also, with unprecedented efficacy, in our work, at the «monadic» level, that of ‘‘‘individual historical objects’’’.

I have included, here, below, a ‘pictogramical/ideogramical/phonogramical’ illustration, in the form of a new kind of E.D. ‘dialectogram’, applied to a particularly relevant case in point:  that of the currently consensus-hypothesized ‘cosmo-historical’ genesis of the Earth-Moon system in which we have our existence at this very moment.

As an axiom, that can be substituted for axiom §9 of the core axioms of the NQ axioms-system for the Seldonian ‘First Arithmetic for Dialectic’, the formal essence of this ‘Hegelian Triadic-Tetradic Product Rule’ is the following --

‘A.  If the current ‘ontology-state’ of the dialectic is expressed via a single dialectical ‘meta-number’ value, call it

then the next (E[_]) ‘ontology-state’ of the dialectic is expressed via the ‘non-amalgamative sum’ of the next two, consecutive, qualitatively distinct dialectical ‘meta-number’ values,

B.  If the current ‘ontology-state’ of the dialectic is expressed via a ‘non-amalgamative sum’ of two, consecutive, qualitatively distinct dialectical ‘meta-number’ values,

then the next (E[_]) ‘ontology-state’ of the dialectic is expressed via a single dialectical ‘meta-number’ value, namely, that value which is the next consecutive value after the value of that one value of that summed pair of values which bears the larger Peano “Natural” Number subscript:

An illustration of the generic dialectical progression that arises per this candidate axiom is also pictured below.

The candidate axiom above represents what we call the ‘convolute product’ version of the ‘Triadic-Tetradic Product Rule’ for dialectical algebras.  Per it, all previous ontology uniformly vanishes when each next, incremental new ontology makes its irruption.

We are also investigating ‘evolute product’ versions of this candidate axiom, wherein previous ontology is conserved, at least ‘possibilistically’, external to and coeval with each ‘newly-irruptant’ increment of ontology. 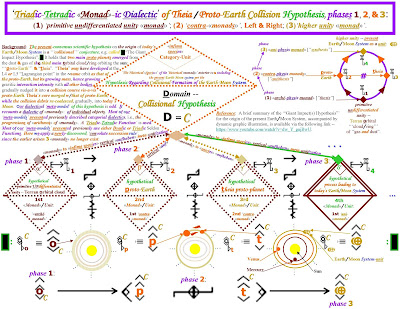 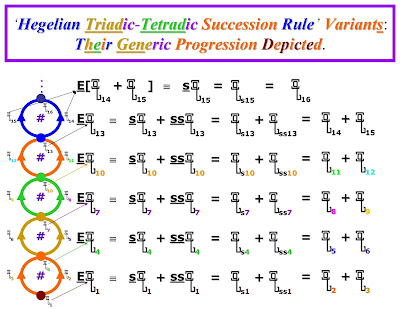 This blog-entry is for the purpose of sharing, with you, the definition of the term ‘‘‘Dialectical Taxonomy’’’ from our forthcoming Encyclopedia Dialectica, volume 0, entitled ‘Encyclopedic Dictionary for a Unified Theory of Universal Dialectics’ --

“A ‘‘‘dialectical taxonomy’’’ is, first of all, a human-cognitive division/«diairesis»/sorting -- of the «monads» or units/individuals ‘‘‘populating’’’ a given Domain of ontolog(y)(ies), or universe of discourse -- their sorting into . . . «Genos» ontological categories, and into their «species» ontological categories. . ., thus including the partial «synagôgê»/collection of each group of «species» category-units into their «Genos» category-unit, i.e., as an instantiation of that which we term ‘vertical «aufheben» dialectic’ [the aspect of F.E.D. dialectics with the clearest roots in our demystification of Plato’s dialectic] -- that is  . . . the ‘meta-unit-ization’ of «species» categories-as-units into their «Genos» category-as-unit . . . .”

“A ‘‘‘dialectical taxonomy’’’ is, further, an ‘«aufheben» taxonomy’ in the sense of that which we have termed ‘horizontal «aufheben» dialectic’, in our ‘unified theory of universal dialectics’.  This means a taxonomy -- a system of ‘‘‘class-ification’’’ of individuals/«monads» together with their ‘similants’ -- structured in accord with the «aufheben» ‘meta-«monad»-ization’ relationships among its ‘self-hybrid’ ontological categories, and their ‘self-hybrid’ «monads» -- that is, among their ‘self-hybrid’ “taxa”, i.e., among their ‘‘‘dialectical synthesis’’’ or ‘uni-«physis»’, “taxa”.”