and the Mission of F.E.D.

I am, together with F.E.D. Secretary-General Hermes de Nemores, and F.E.D. Public Liaison Officer Aoristos Dyosphainthos, organizing to develop a new, expanded edition of the F.E.D. introductory documents, for publication in book form, under a new title --
The Dialectica Manifesto:  Dialectical Ideography and the Mission of Foundation Encyclopedia Dialectica [F.E.D.]


-- and under the authorship of the entire Foundation collective.
Below is the ninth installment of a 29-part presentation of this introductory material, which the F.E.D. General Council has authorized for serialization via this blog over the coming months, as we develop the material.

I plan to inter-mix these installments with other blog-entries, including the planned additional F.E.D. Vignettes, other F.E.D.  news, my own blog-essays, etc.


Links to the earlier versions of these introductory documents are given below.


Unlike the typical blog-entry, this series will attempt to deliver an introduction to [in this case, to the Foundation worldview as a totality], in a connected account, making explicit many of the interconnexions among the parts.

and the Fusion Breakthrough.


The prospect of fusion power epitomizes the vast scientific, industrial-technological, and social benefits — potentially human-social progress re-igniting, and human-species-continuation-enabling — of a Nonlinearity Breakthrough.


Consider the intensely ‘auto-kinesic’, nonlinear character of a “plasma” --


“A plasma is a gas of charged particles, in which the potential  energy of a typical particle due to its nearest neighbor is much smaller than its kinetic energy.”

“The word plasma comes from the Greek plásma, meaning “something formed or molded.”

It was introduced to describe ionized gases by Tonks and Langmuir [in a 1929 paper — F.E.D.].

The motion of the non-neutral, electrically-charged «plásma» “particles” just described continually, dynamically generates a changing magnetic field — a magneto-dynamical field of forces.
The locations and concentrations of the electric charges of these “particles”, changing moment by moment, due to that same motion, also continually change the «plásma»’s electric field of forces, sustaining an electro-dynamical field.


A «plásma» thus generates, by the continual motions of its electrically-charged constituents, an overall or collective electro-magneto-dynamic field of forces.

That field of forces, in addition to acting on anything external to the «plásma», to a degree dependent upon the physical-spatial proximity of such an “anything” to the «plásma», also acts  — self-reflexively and self-refluxively  — on the «plásma» itself, also because its constituent “particles” are electrically-charged, rather than being mostly electrically neutral[ized], as in typical gas-phase matter.


The «plásma»’s field continually changes the motions of its constituent “particles”, and thus changes the electric/magnetic fields that they are generating.


“Nonlinear self-consistent motions” are thereby possible, whereby the «plásma»-internal, self-generated field also guides the «plásma»’s “particles” to reproduce their very pattern of flow by which they generate that «plásma» field which, in turn, generates that «plásma» flow . . .  viz. --

“It is determined by the distribution of particles and in turn influences their motion . . ..”
[N. N. Kalitkin, D. P. Kostomarov, Mathematical Model of Plasma Physics, http://www.eolss.net/Sample-Chapters/C02/E6-03A-03-03.pdf ].

“They are coherent structures in which particles become trapped in the wave potential.”

“These phenomena require a kinetic description i.e. a description in which the velocity distribution of the particles is taken into account.”

“Trapping structures extend the areas in configuration space in which a plasma is unstable.”

“The main argument and result of this work is that there exist certain kinds of perturbations of an equilibrium that can destabilize the plasma, even if linear theory predicts stability.”

“The usual procedure in plasma theory of analyzing the stability of a plasma by means of a linearization of the equations is therefore questioned.”
[Alejandro Luque Estepa, Ph.D. Thesis, Notes, “Electrostatic Trapping as a Self-Consistent Phenomenon in Plasmas and other Collective Systems”, http://trove.nla.gov.au/work/5306782?q=subject%3A%22plasma+instability%22&c=book&versionId=6172546 ].

The text Dialectical Ideography, in its Section 1. b., entitled Why Dialectical?, glosses a hypothetical fusion reactor design, which F.E.D. has dubbed the ‘Cyclonetron’ design [link:  http://www.dialectics.org/dialectics/Dialectic_Ideography_files/5_Dialectics-Part1b-WhyDI_OCR.pdf ].

A «plásma» can potentially generate and contain and anchor fields which are far stronger -- and far more effective at confining that plasma -- than the fields that any external, solid-phase magnets and/or electrodes can sustain, and still remain in the solid phase.
This design hypothesis is based upon the propensity or proneness of ‘‘‘flowing media’’’, or ‘‘‘rheids’’’  — whether they be the » electro-neutral liquid or gaseous ‘‘rheids’’’ described by the [nonlinear] Navier-Stokes system of equations, or the electrically-charged, ‘electro-magneto-active’ and ‘electro-magneto-self-active’ «plásma» ‘‘rheids’’’ described by the [nonlinear] Maxwell-Boltzmann-Vlasov [vector-]equation(s), by the Klimontovich equation, and by the Liouville equation — to “spontaneously” generate, i.e., to ‘self-generate’, ‘‘‘cyclonic’’’ [and ‘‘‘anti-cyclonic’’’], or ‘‘‘self-re-entering’’’, vortices:  ‘‘‘toroidal vortices’’’.

This ‘‘‘genericity’’’, by ‘‘‘rheids’’’, with respect to ‘‘‘toroidal-vortical flow-forms’’’, may be related to the ubiquitous, ‘‘‘particle-like’’’, ‘‘‘solitary wave’’’, or ‘‘‘soliton’’’, solutions that have been derived, in closed-form, for a very large and diverse variety of one-dimensional, nonlinear, partial-differential wave-equations.

This conjecture is depicted below. 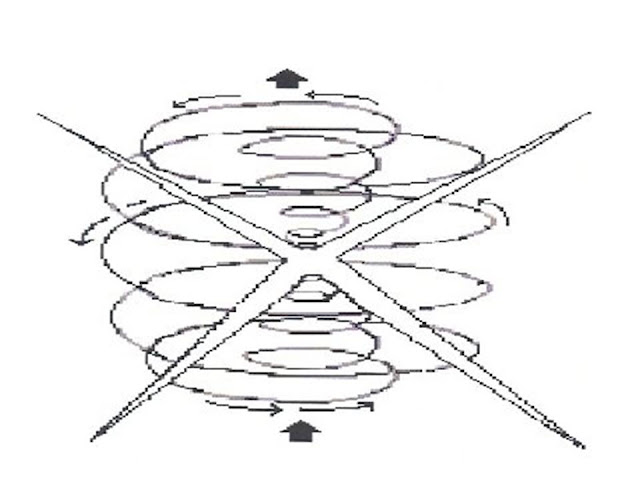 In the above-depicted hypothesized nonlinear self-consistent motion of the «plásma», fresh fusion fuel is injected at the base of the ‘«plásma» cyclone’, then ‘vortically’ conveyed up the ‘eye chimney’ of that ‘cyclonic «plásma» vortex’, and concentrated maximally, umbilicoid-like, at the ‘‘‘heart’’’ of that ‘eye chimney’ -- approximately half-way up that ‘eye chimney’ -- by «plásma»-borne ‘electro-magneto-dynamic’ fields, stronger than any solid-state -- e.g., metal -- magnetic field coils and/or electrodes, could source, without themselves being converted to a molten liquid phase, to a vaporized gaseous phase, or even to an ionized «plásma» phase, thus with sufficient field-strength to overcome the Coulomb mutual repulsion of the fusion fuel nuclei, thereby bringing these nuclei into a proximity sufficient to ignite, and to continuously sustain the ignition of, the fusion reaction, thence continually, ‘vortically’ conveying the fusion reaction products up and out of the top of the ‘eye chimney’ for removal, in a continuous toroidal motion, the motion of a «plásma»-constituted torus ‘rolling upon itself’.