Unsolvable Algebraic Equations of the Seldonian XQ_ Arithmetics for Dialectics.

Caveat.  This blog-entry -- unlike many others, typical within this blog -- is not about interpretations, or 'meta-model meta-equation' solutions, of the generic 'meta-numerals' that inhere in the XQ_ algebras, wherein X represents one of the standard arithmetics, and wherein the '[pre-]subscriptization' of X indicates the subsumption of that standard arithmetic by one of the non-standard, dialectical arithmetical Q_ axioms-systems, and the subsumption of the set or space of numerals, X, by the set or space of 'meta-numerals' , {qX} = XQ.


As in the first text module pasted-in below, we have noted, in this blog, before, the expectation, related to Gödel’s epochal “incompleteness theorem”, that any axioms-system for a standard arithmetic that encompasses at least the so-called “Natural” numbers arithmetic will permit the formation, within its rules of syntax, of (one or more) algebraic equation(s), thus “well-formed”, which are unsolvable within that arithmetic, and one of which will the “deformalization” of the “Gödel formula”, G, for that arithmetic.

If, on the contrary, G, in fact, can be formally deduced from those axioms, then that axioms-system for this standard arithmetic is “formally inconsistent”, i.e., is ‘“formally self-contradictory’’’ -- i.e., a false proposition can be deduced from its axioms.

¿How much can we rightfully expect this expectation to hold also for the axioms-systems of those non-standard systems of arithmetic that are the Seldonian ‘arithmetics for dialectics’?

¿Must the Seldonian ‘arithmetics for dialectics’ also ‘‘‘contain’’’ algebraic equations, tied to their own versions of G, that are “well-formed” but unsolvable within them, out of formal-logical necessity?

Let us grapple, first, with a easier question:  ¿Do the Seldonian ‘arithmetics for dialectics’ also ‘‘‘contain’’’ algebraic equations that are “well-formed” within them, but that are also unsolvable within them?

The NQ_ system of arithmetic encompasses, through its product rule axiom, axiom §9, an additions-only excerpt from Natural-numbers arithmetic, if only within its subscripts level.

And, indeed, the following equation of NQ_’s algebra is, within the NQ_ axioms-system, well-formed but unsolvable:  for every n in N, x = qx is not in NQ, if --

And, as also with the ‘Gödelian Dialectic’ of the standard systems of arithmetic, for its systematic progression ['---)'] of number-spaces --

In this case, it is the WQ_ dialectical arithmetic, that renders solvable, within itself, that equation.  That equation is solvable by setting qx = q0, and  by applying the ‘double-conservation «aufheben» evolute product rule, axiom §9 [see second module below] --

However, also as with the “standard systems of arithmetic”, this next arithmetic, WQ_, has its own unsolvable equation(s) -- in this example, an equation not even expressible -- not “well-formed” -- within NQ_, because q0 is not an element of the ‘meta-number space’ NQ --

In this case, it is the ZQ_ dialectical arithmetic, that renders solvable, within itself, the equation immediately above.  That equation is solvable by setting qx = q-w, and by applying a new version of axiom §9, e.g., the ‘meta-heterosis convolute product rule’, as follows --

However, also, and, again, as with the “standard systems of arithmetic”, this next arithmetic, ZQ_, has its own unsolvable equation(s) -- in this example, an equation involving the operation of ‘ “purely”-qualitative, categorial division’ --

The operation of ‘ “purely”-qualitative, categorial division’, '_ /_', is not defined for the NQ_ arithmetic, so that the equation immediately above would not be “well-formed” within it.

Unrestricted binary ‘qualitative division’ is defined for the ZQ_ dialectical arithmetic, e.g., via the ‘meta-heterosis convolute product rule’ version of axiom §9,  such that --

However, even in ZQ_, and in QQ_, and in RQ_, the ‘qualitative division’ of a category by a cumulum of categories --

-- is not a value that is contained in any of their ‘meta-number spaces’.

One has to progress in the other direction of the Seldonian double-progression [see bottom-most two modules, below] of systems of arithmetics for dialectics, to find an arithmetic in which a value of a form similar to that of --

That arithmetic, one that accomodates "purely" qualitative, 'qualo-fractal' '''fractions''' of that form, is the 24th arithmetic in that Seldonian progression of dialectical arithmetics --


For more regarding these issues, see the F.E.D. Primer by F.E.D. Secretary-General Hermes de Nemores -- 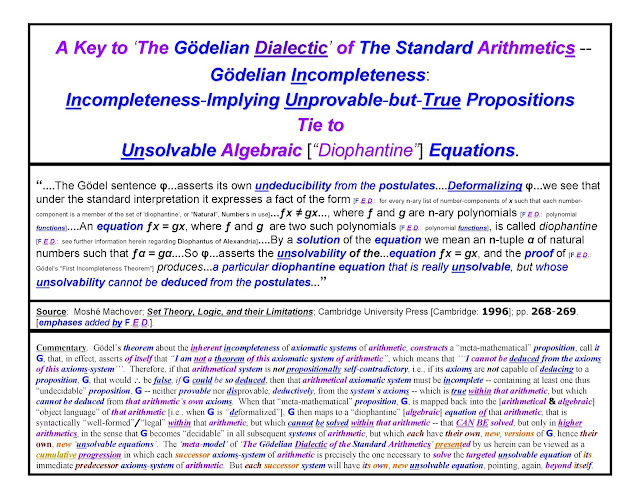 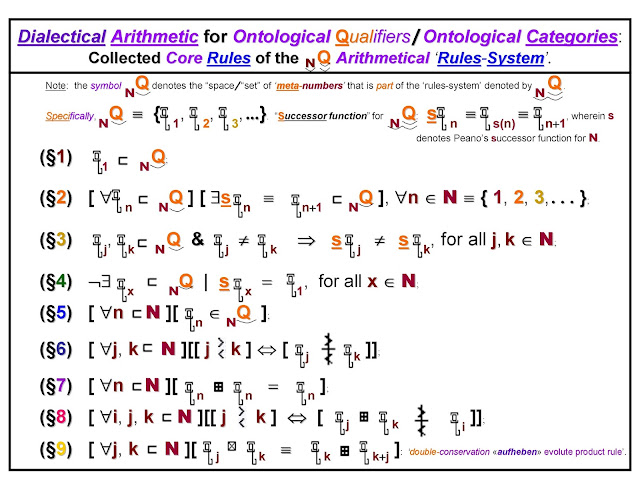 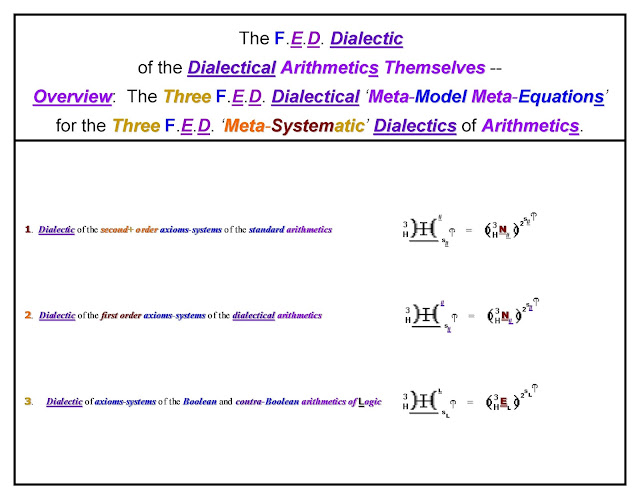 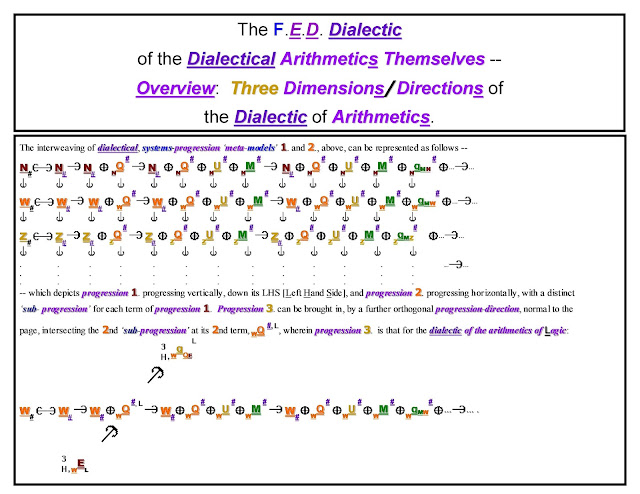