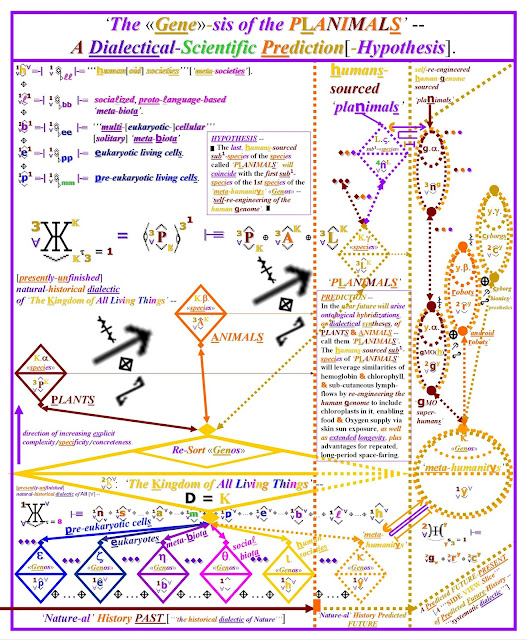 The purpose of this blog-entry is to illustrate, for you, the potential benefits of dialectical-heuristic rules of inference in discovering new scientific hypotheses that involve predictions about the future ontological categorial content of a given Domain.  In the case at hand here, that Domain is our cosmos as the whole -- ‘‘‘Nature’’’ as Natural History:  the maximal Totality.
As we see it, based upon wide experience in discerning the vast plethora of individual dialectical processes that constitute our cosmos, the two principal principles of dialectical-heuristic, inductive and probabilistic inference are the following --

1.  ‘The Rule of ‘Contra-Category’ Expectation/Prediction’.  When one discerns that a new first, or «arché» category has irrupted into existence --  thus as the first category of a new ontological Domain -- then one should expect, and even venture to publicly predict, with substantial probability based upon empirical, inductive frequency-evidence from many other similar cases, that a new, second category of this new Domain will, ‘self-combinatorially’ irrupt, at some time in the future, as a ‘meta-genealogical self-otherization’ of the first category, and, perhaps, as an «aufheben» ‘self-meta-unit-ization’ of the some of the units of that first category.

2.  ‘The Rule of ‘Uni-Category’ Expectation/Prediction’.  When one discerns that an apparent polarity and radical, “unbridgeable” duality has formed, between the new first, or «arché»-category, of a new ontological Domain, and its ‘meta-genealogical self-otherization’ as an even newer, second category of this new Domain, then one should expect, and even venture to publicly predict, with substantial probability based upon empirical, inductive frequency-evidence from many other similar cases, that a third category of this new Domain will, ‘mutually-combinatorially’ irrupt, at some time in the future, as a ‘meta-genealogical mutual-transcendence’ of that duality, and, perhaps, as a mutual-«aufheben» ‘hybrid-unit-ization’ of some of the units of that first category, with some of the units of that second category.

In the case at hand here, it is dialectical-heuristic rule of inference 2. that, we hold, applies.

The case at hand here is as follows --

That widespread conviction of ‘unbridgeability’ notwithstanding; despite that “absolute certainty” that a dialectical synthesis of plant and animal is forever impossible, we venture the dialectical hypothesis that, in the future, an ontological «species»-category of ‘PLANT/ANIMAL hybrids’ will actualize, as a «species»-category with many sub-«species» sub-categories.

We use the neologism ‘PLANIMALS’ to name this predicted future ‘cosmo-ontological category’.

It might be assumed that we are referring to a future fruition of further developments in existing biological forms, such as that of the “Venus Fly-Trap”.

However, we think it much more likely that the future sub-«species» of the predicted ‘PLANIMALS’ «species» will be constituted mostly by the human ‘GMO-praxis’ -- the advanced technological praxis of creating “Genetically Modified Organisms”.

In particular, we think that the systematically and historically last sub-«species» of this predicted «species» will be one of genomically-modified -- of ‘‘‘genomically re-engineered’’’ -- [former] humans.

The specific genomic modification that we infer, would be one leveraging the similarities of the chlorophyll and hemoglobin molecules, and, potentially, of the genetic apparatus for building and deploying those molecules, plus the genetics of the sub-cutaneous lymphatic flow exhibited by human bodies, to install an abundance of photosynthesizing chloroplast organelles into that lymphatic flow.  This would enable a partial supply of food, of life-extending phyto-chemicals and micro-nutrients, and of Oxygen, together with a partial pre-cleansing of Carbon Dioxide build-ups from exhalations, to be accomplished, simply by exposing the skins of those so-modified to sun light -- or even to [other] star-light, given sufficient proximity/light-energy-density.

These modifications, we expect, will confer markedly extended life-spans on those so-modified, as well as affording them crucial advantages for prolonged and repeated inter-planetary and even inter-stellar space-faring.

For ‘poster-izations’ of many of these insights -- specimens of ‘dialectical art’ -- see: