The 'Goedelian Dialectic' of the "Standard Arithmetics"-- DEPICTED.


Full Title:  The Goedelian Dialectic of the Standard Arithmetics -- Rendered via Pictures


The 'Dialectical Meta-Equation' that generates the 'Meta-Systematic Dialectical' Presentation of the Standard Arithmetics, depicted below, is defined, symbolic-element-by-symbolic-element, as follows  -- 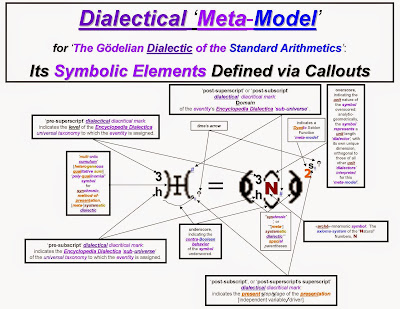 'The Goedelian, [Meta-]Systematic Dialectic of the Standard Arithmetics':  First Triad -- 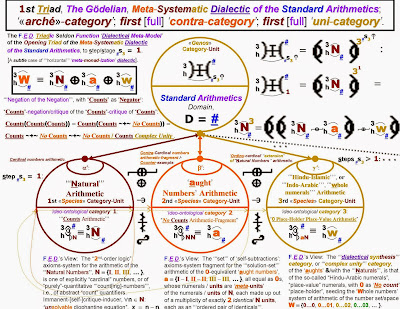 Initial Overview Depiction:  'The Dialectic of the Standard Arithmetics' -- 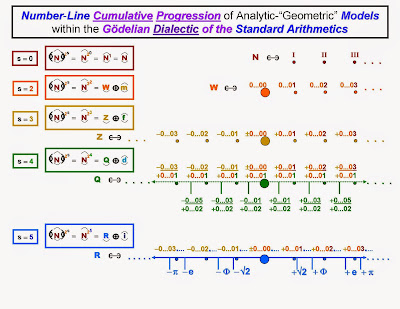 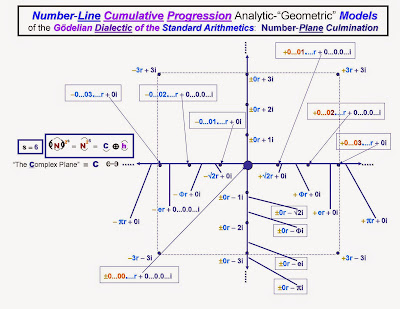 The Axioms-System denoted by N# -- 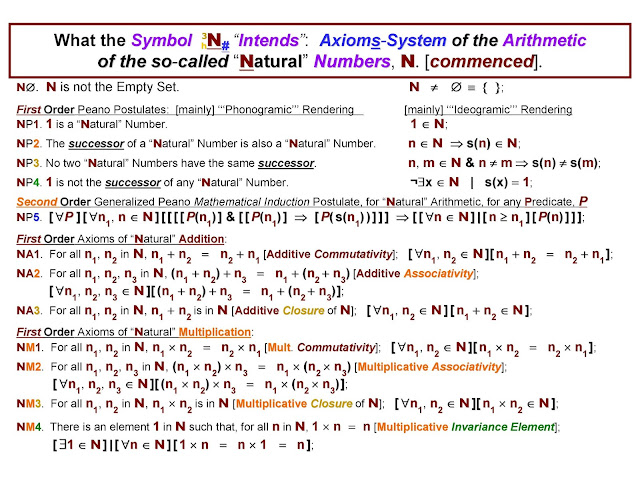 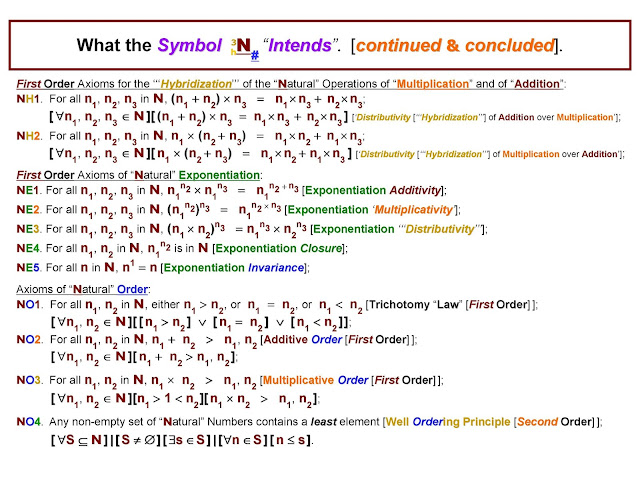 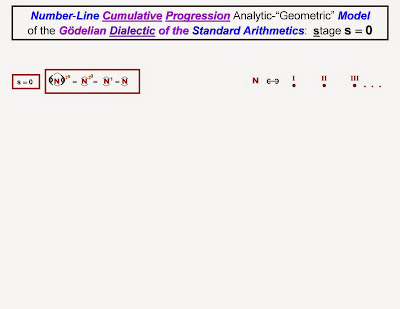 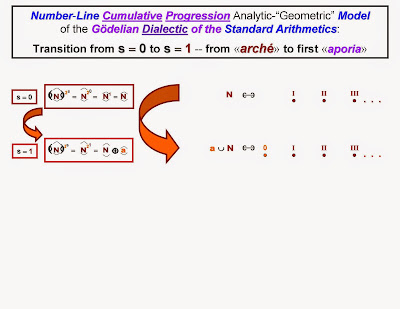 s# = 1:
N# ~+~ a#    =   The "Natural" Numbers Arithmetic, plus their 'aught' numbers axioms sub-system counter-example, refuting any claim of the "Natural" Numbers System to '''completeness''' regarding [Goedel:  "diophantine"] algebraic equation-solving capability;

The Axioms-System denoted by W# -- 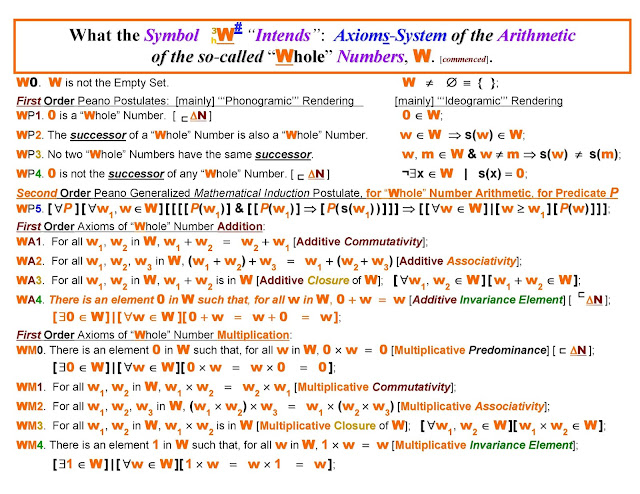 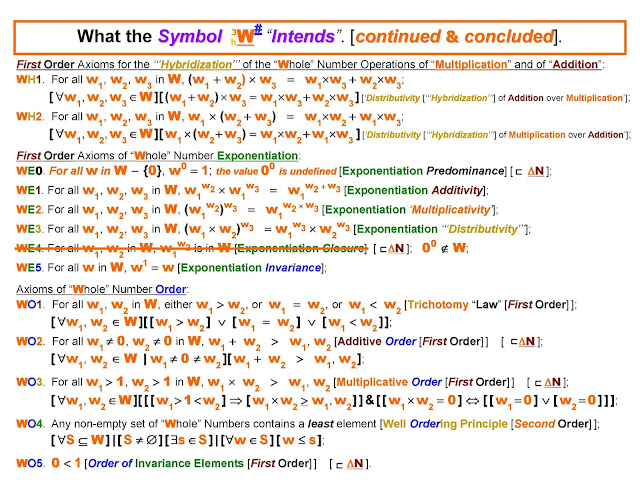 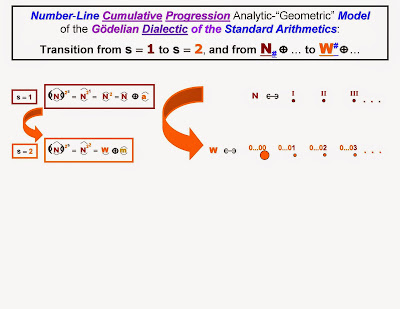 s# = 2:
W# ~+~ m#    =   The "Whole" Numbers Arithmetic, plus their 'minus' numbers axioms sub-system counter-example, refuting any claim of the "Whole" Numbers System to '''completeness''' regarding [Goedel:  "diophantine"] algebraic equation-solving capability;

The Axioms-System denoted by Z# -- 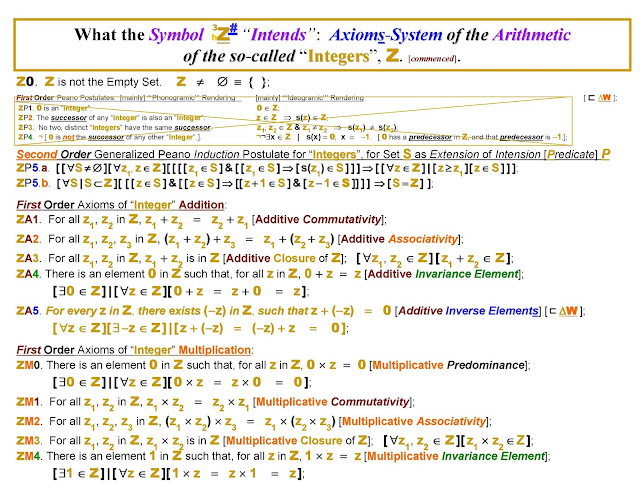 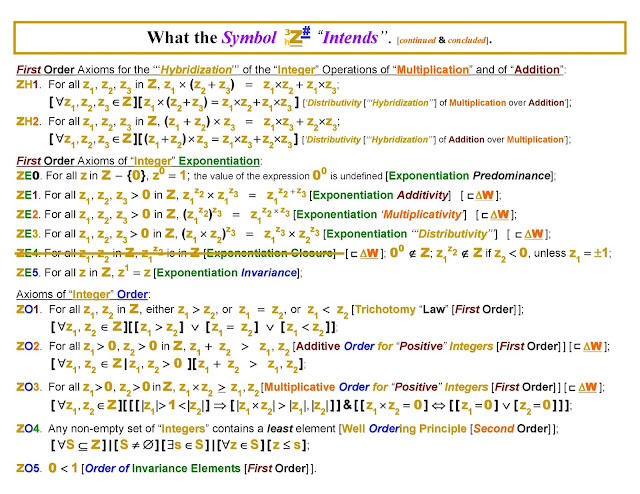 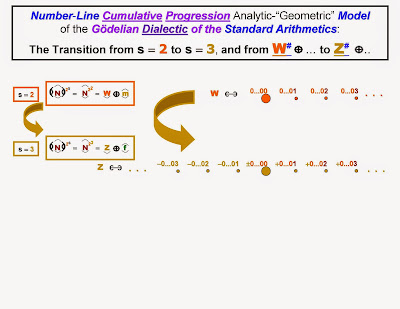 The Axioms-System denoted by Q# -- 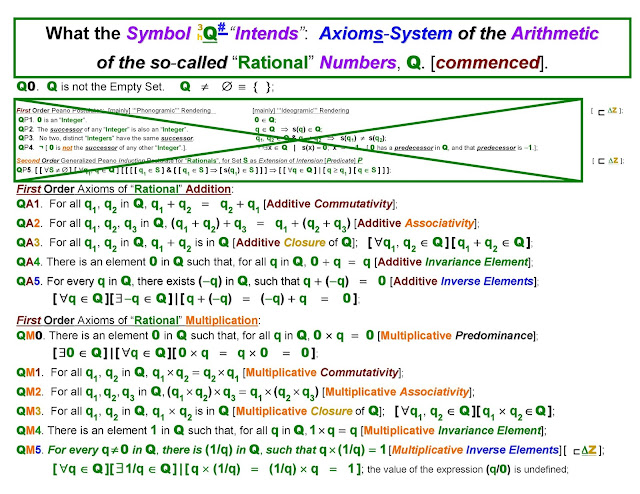 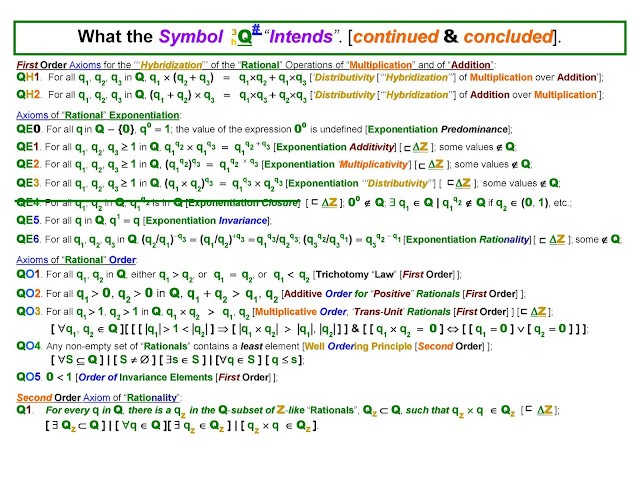 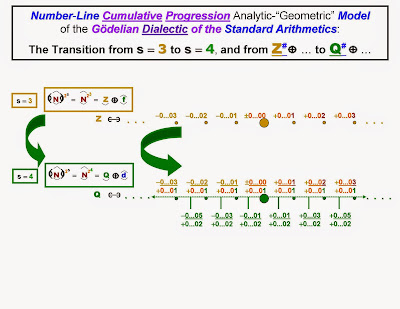 
The Axioms-System denoted by R# -- 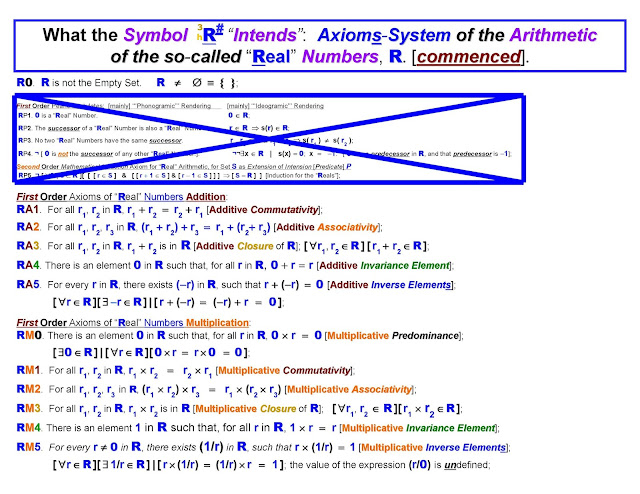 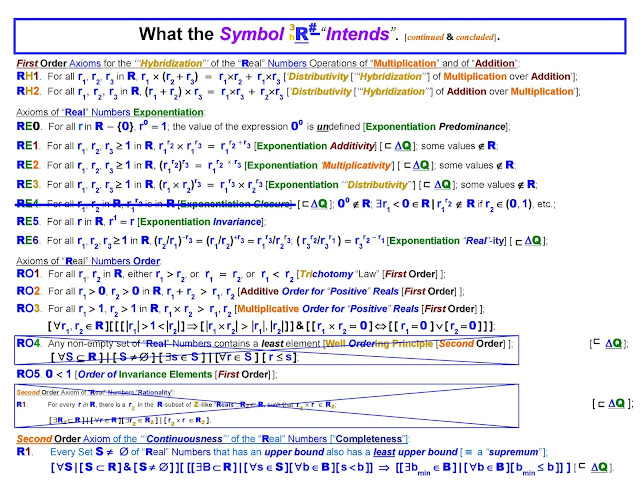 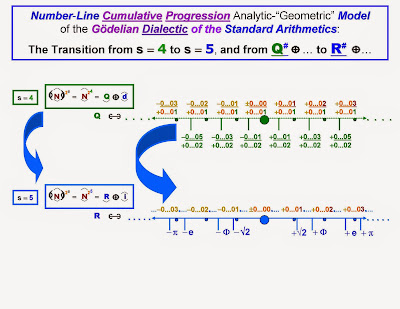 s# = 5:
R# ~+~ i#    =   The "Real" Numbers Arithmetic, plus their "imaginary" numbers axioms sub-system counter-example, refuting any claim of the "Real" Numbers System to '''completeness''' regarding [Goedel:  "diophantine"] algebraic equation-solving capability;


The Axioms-System denoted by C# -- 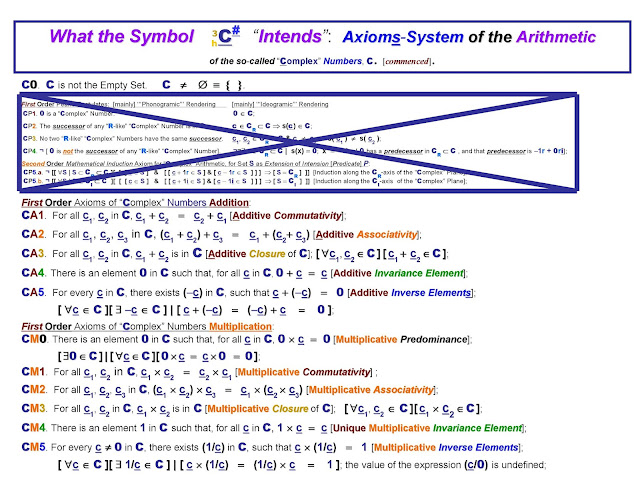 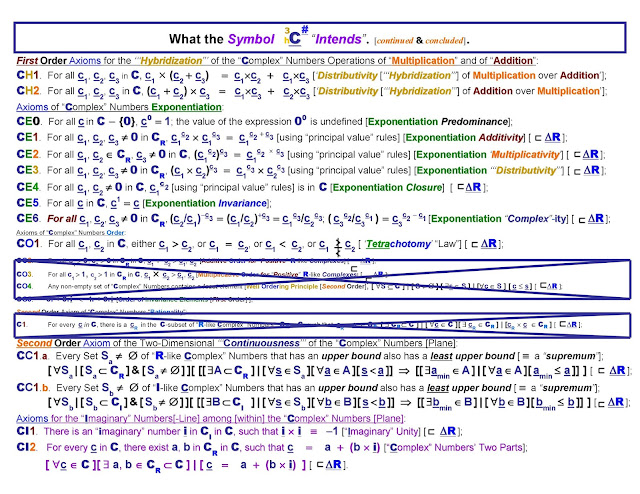 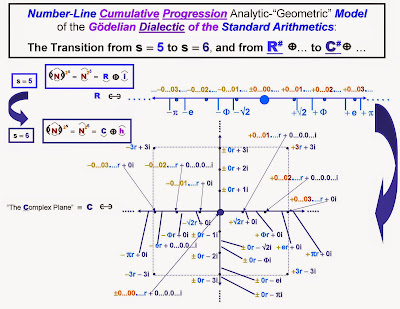 Final Overview Depictions:   'The Meta-Systematic Dialectical Method of Presentation of the '''Dialectical Progression''' of the Standard Arithmetics' -- 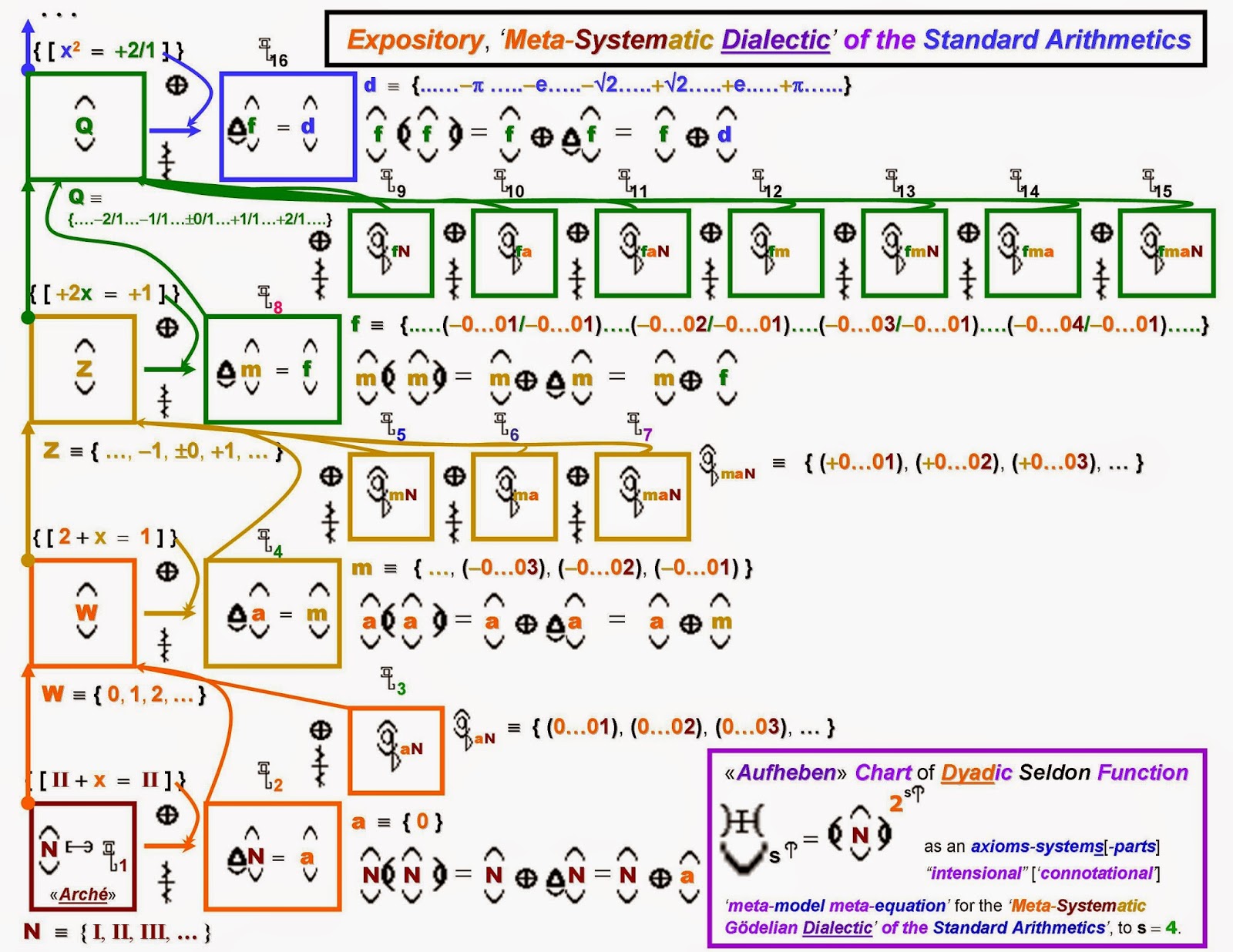 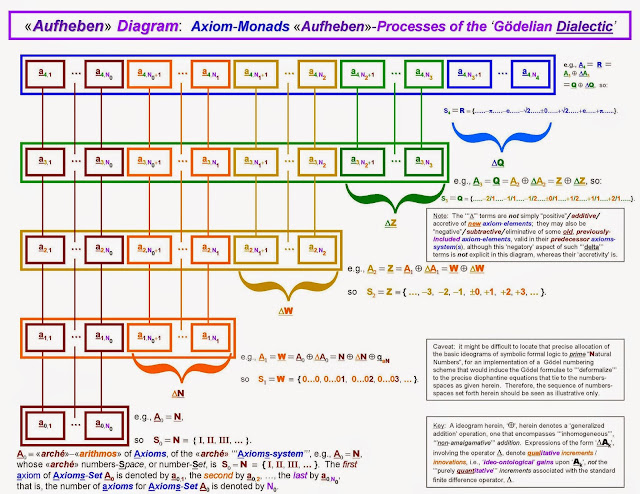 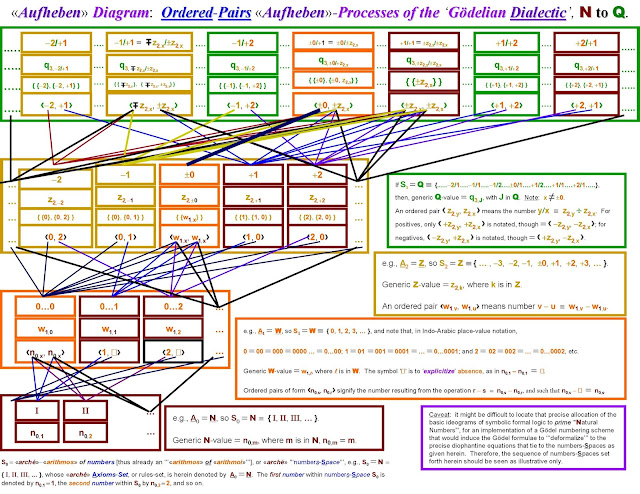 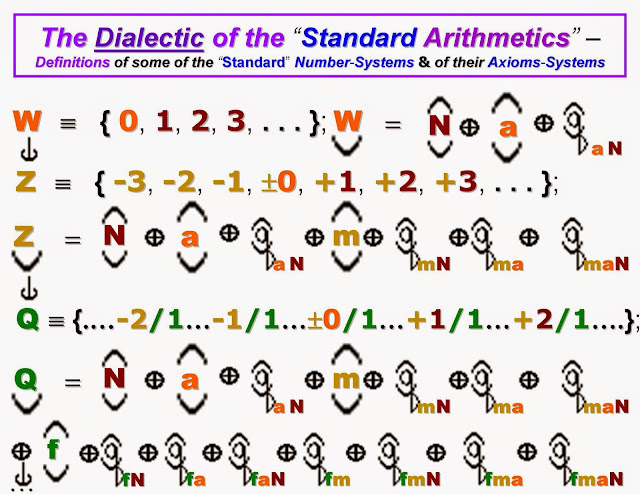 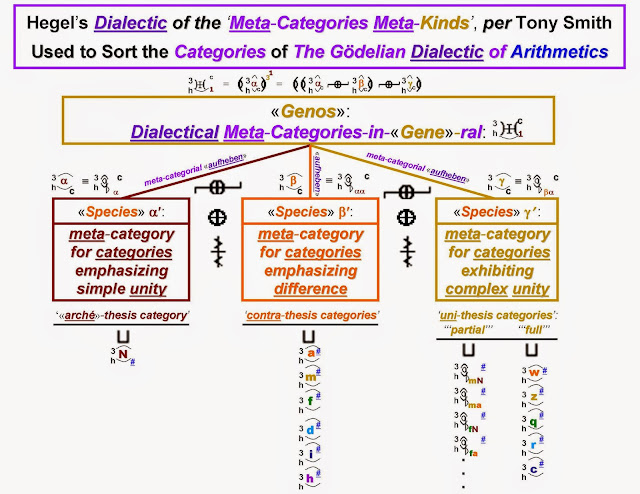 
"...Hegel's procedure is not really ad hoc at all.  To see this we have first to consider what a category is.  It is a principle (a universal) for unifying a manifold of some sort or other (different individuals, or particulars).  A category thus articulates a structure with two poles, a pole of unity and a pole of differences.  In Hegelian language this sort of structure, captured in some category, can be described as a unity of identity in difference, or as a reconciliation of universal and individuals.  From this general notion of a category we can go on to derive three general types of categorial structures.  In one the moment of unity is stressed, with the moment of differences implicit.  In another the moment of difference is emphasized, with the moment of unity now being only implicit.  In a third both unity and difference are made explicit together."


"Yet another way of speaking about the immanent connections here is through the idea of a dialectical contradiction."


"Hegel's views on contradiction have been quite controversial.  But at least in the context of constructing a systematic theory of categories he appears to have meant something fairly straightforward. "


"If a category is in general a principle that unifies a manifold, then if a specific category only explicates the moment of unity [M.D.:  e.g., category N#, connoting the system of standard arithmetic of the "Natural" Numbers, as given above], leaving the moment of difference implicit [M.D.:  all of the subsequently-presented different kinds of standard numbers of the standard arithmetics are still merely implicit and invisible in N#, especially/next those that involve the number 0], then there is a "contradiction" between what it inherently is qua category [M.D.:  and there is also a discrepancy between the Domain of standard number-in-general, denoted by #, and N# as a claim to exhaustively present that Domain explicitly] (a unifier of a manifold) [M.D.:  in our case, N# denotes the "unity" of the "manifold", or <<arithmos>>, of the potentially- infinitely-many number-individuals known collectively as the "Natural" Numbers], and what it is explicitly (the moment of unity alone) [M.D.:  as well as a Goedelian incompleteness of the N# arithmetic -- it's incapability to solve semantically all of the "diophantine" algebraic equations which it can well-form syntactically]."


"Overcoming this contradiction requires that the initial category be "negated" in the sense that a second category must be formulated that makes the moment of difference explicit [M.D.:  e.g., in our case, the second category is a#, connoting the axioms-sub-system for the number-space a = {I-I, II-II, III-III, ... }, the number-space of the 'self-differencing' of the "Natural" Numbers, describing the different kind of number(s), which is(are) missing in the N number-space, namely, 0(s)]."


"Once again, there is a contradiction between what a category inherently is and what it is explicitly [M.D.:  and, in our case, there is also a discrepancy between the Domain of standard number-in-general, denoted by #, and N# ~+~ a# as a claim to exhaustively present that Domain explicitly, and, in particular, an omission of the explicit axioms-element, q#aN, which reconciles and re-unifies N# and a# in the new  system of arithmetic of the "Whole" Numbers:  W#  = N# ~+~ a# ~+~ q#aN, which is contained in presentation stage 2 --


"Overcoming this contradiction demands that the second sort of category also be negated, and replaced [M.D.:  here Tony Smith, more explicitly than earlier in this quoted discourse, makes the typical, but vitiating, fall into a '''convolute''' interpretation of dialectic; the key to many F.E.D. Dialectics breakthroughs is the '''evolute''' interpretation of dialectical categorial progression, which is also clearly called for by Hegel, in his supreme methodological prescription, in the final section of his <<Logik>>:  "In the absolute method the Notion maintains itself in its otherness, the universal in its particularization, in judgement and reality; at each stage of its further determination it raises the entire mass of its preceding content, and by its dialectical advance it not only does not lose anything or leave anything behind, but carries along with it all it has gained ..."] with a category in which both poles, unity and difference, are each made explicit simultaneously [MD:  in our case, that third [sort of] category is connoted by the category-symbol q#aN.]."


"Hegel is well aware that "contradiction" and "negation" are not being used here in the sense given them in formal logic.  Following a tradition that goes back to Plato, he asserts that in the above usage "contradiction" and "negation" are logical operators for ordering categories systematically, as opposed to logical operators for making formal inferences.  The logic with which we are concerned here is dialectical logic." ...


"... Since a category of unity-in-difference on one level can prove to be a category of simple unity from a higher level perspective, thereby initiating another dialectical progression from unity through difference to unity-in-difference, we can construct a systematic theory of categories by employing the dialectical method.  In this sort of theory we move in a step-by-step fashion from simple and abstract categories to those that are [M.D.:  more] complex and [M.D.:  more thought-]concrete, with dialectical logic providing the warrant for each transition. ..."


"... At the conclusion of the linear progression of categories we once again arrive at the initial starting point [M.D.:  in our case, back to/at the Domain of '''[standard] number-in-general''', denoted by #].  But it has now been apprehended in thought [M.D.:  i.e., has been systematically analyzed into its component species, and thereby comprehended, for all who have '''followed''' the systematically-ordered, categorial progression presentation, by means of the dialectical theory constituted by that progression]."


"If dialectical logic is rigorously adhered to, the move from one category to the next [M.D.:  or, evolutely, from the preceding sub-progression/cumulum of categories, to that again, plus the new, additional categories that arise from the self-critique of that preceding cumulum of categories, together forming the new cumulum that must, in its own turn, be self-critiqued...] is not ad hoc.  The linear progression from a category of immediate unity to [M.D.:  or, evolutely, from that to that plus; in our case, from N# to N# ~+~ a#] one of difference [M.D.:  a#], and from there to [M.D.:  or, evolutely, from the non-amalgamtive, heterogeneous SUM of those first two categories, to them plus; in our case, from N# ~+~ a# to N# ~+~ a# ~+~ q#aN ] a category of unity in difference [M.D.:  q#aN ], is not a mere formal schema imposed by Hegel externally.  It is instead "the absolute method . . . [M.D.:  which] does not behave like external reflection but takes the determinate element from its own subject matter, since it is itself that subject matter's immanent principle and soul."... In this manner the object realm [M.D.:  in our case, a realm of '''idea-objects'''; of "[standard] numbers and their arithmetics] of experience [M.D.:  in our case, an experience of partly '''internal''', mental, introspective, 'intro-objective', 'inter-subjectively objective', 'psychohistorical material'] has been reconstructed in thought [M.D.:  and, thereby, uplifted and transformed, from "a chaotic conception of the whole" [Marx], to systematically-ordered and subjectively comprehended scientific knowledge, for those who have '''followed''' this categorial progression presentation of theory]."