‘«Gene»-ral’ Solutions to the Seldon Equations, Diachronic & Synchronic, for epoch/step 3.

to the Seldon Equations,
Diachronic & Synchronic,


I have also posted this text+<<monad>> below, for your convenience. 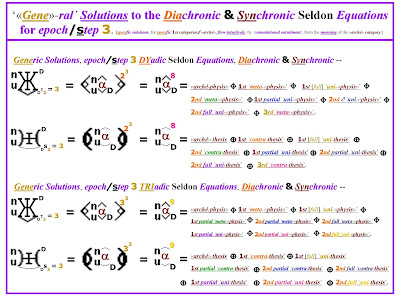 Dialectic of the Arithmetics of Dialectic, Second Triad.


I have also posted this text+<<monad>> below, for your convenience, together with the earlier 'dialectogram' which presents the first triad of the Seldonian Meta-Systematic-Dialectical method of presentation of the progression of the [Axioms-]Systems of the Seldonian Dialectical Arithmetics. 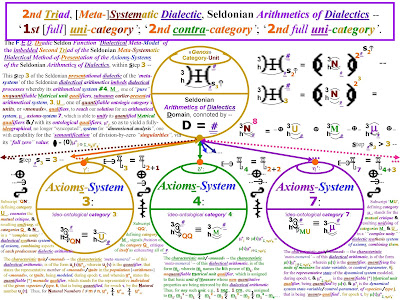 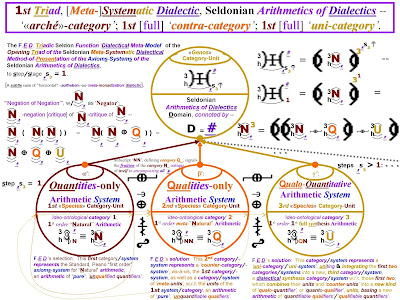 
From time to time, I like to share with you some of the gems of insight that leap from out of the ‘‘‘multilogues’’’, among Karl Seldon and other members of the Foundation, and from the transcribed versions, published internally, including of those ‘‘‘multilogues’’’ in which I did not happen to participate, when and if those [edited] transcripts are cleared for public sharing by the Foundation’s General Council.


I have pasted-in, below, an excerpt of Karl Seldon's remarks from the edited transcript of a recent such ‘‘‘multilogue’’’.

F.E.D. Vignette #6, by F.E.D. Public Liaison Chief Aoristos Dyosphainthos, regarding The Dialectic of Oppositions, according to Muses and Seldon --

"The meaning of the word-element [prefix] ‘op’ includes connotations of “against”.

Thus, an ‘op-posit[e]’ may mean a term as “posited” against one other term, or against multiple other terms.

In common discourse, and, in many particular cases, quite aptly, ‘op-posit-tion’, or ‘op-pos[e]-ition’, may validly imply connotations of ‘‘‘mutual negativity’’’ -- of conflict, mutual antagonism, discord, and/or “diametric” qualitative polarity -- even of ‘‘‘complementary’’’ or of ‘‘‘mutually annihilatory’’’ contradistinction.

However, in its most ‘«gene»-ral’ -- most universal -- meaning, abstracted to the point of including all known cases/instances/«species» of opposition, our term ‘dialectical, supplementary opposition’ connotes ‘‘‘mutual negativity’’’ merely and only as mutual ‘not-ness’, as mutual distinctiveness, as mutual [ontological] difference.

As such, it simply means ‘next-ness’ in a symbolically-represented categorial progression, a progression of symbolized ontological ‘‘‘«arithmoi» of «monads»’’’.

Being a categorial ‘op-posit[e]’ means being posited ‘op to’ (an)other ontological category-symbol(s).

Even categorial-symbolic ‘before-ness’/‘after-ness’ in-«gene»-ral, i.e., including mediate[d], rather than just immediate -- non-consecutive, rather than just consecutive -- ‘~next-nesses’/‘followings’ /‘precedings’ still fall within the meanings of ‘dialectical, categorial, supplementary oppositeness’ for us."

'Intra-Duality' is the CAUSE of DIALECTIC. F.E.D. Vignette # 23, by Karl Seldon.


'Intra-Duality' is the Cause of Dialectic.


-- written by our co-founder, Karl Seldon, has recently been cleared for posting to the www.dialectics.org  Vignettes Page, by the F.E.D. General Council.


I have also posted this text below, for your convenience.

Dialectic is the cause of time.

At the inception of each/any dialectical sub-universe -- as at the so far deepest known inception, or ‘«arché»-ic ontology’, of the universe, as the totality -- ‘intra-duality’, ‘indivi[sible]-duality’, is that which divulges, by externalizing/manifesting/‘visible-izing’/‘explicitizing’/actualizing it, a formerly only ‘‘‘internal’’’, unmanifest, invisible, implicit, potential ‘supplementary otherness’ to what the ‘«arché-arithmos»’ presented/manifested outwardly.


Then, there being two «arithmoi» present, the two can interact, and combine, to yield yet a third, hybrid, ‘‘‘synthesis’’’ «arithmos», one qualitatively contra[ry]/opposite to both of the earlier two, by a ‘complex-unifying «allo-aufheben» hybrid-«monad»-ization’ [qyx] [as well as a fourth, re-‘self-hybridization of the previous self-hybridization [qyy] ] --

Next, the ‘intra-duality’ of the third «arithmos», & of the fourth «arithmos», as well as their interactions with one another, & with the first two «arithmoi», can give rise to a further ‘self-iteration’ of this ‘ontological-categorial combinatorics’, of this formation of new -- ‘self-hybrid’ & ‘mere hybrid’ -- «arithmoi», of this ‘onto-dynamasis’ -- in short, of this dialectic.

‘Intra-Duality’ is an empiric, inductive universal.

‘Intra-Duality’, through its consequences, is encountered ubiquitously throughout Nature, including within the most-recent-to-irrupt part of Nature known to us, its most recent outgrowth/‘self-extention’, namely ‘‘‘human Nature’’’.

And that recurrent ‘intra-duality’ is the real driver of the Dialectic of Nature, of ‘cosmological meta-evolution’, the real generator of quanto-qualitative change throughout the cosmos.

But how do we explain ‘intra-duality’?

How do we account for its universality, drawing its myriad & qualitatively diverse «species» into a unified «genos»?

Why does ‘intra-duality’ exist at all?  Why is its existence so ‘‘‘necessary’’’, ineluctable, inescapable?

Why can’t our universe be just Boolean:  x[x] = x -- be just “simply reproducing” of itself, a “linear equilibrium”?

Let us not offer a technical explanation, at this stage.

Let us rather provide a “divination” of ‘intra-duality’, in the sense of ‘‘‘discovering or conjecturing things about something obscure by means of intuitive perception, or insight’’’.

Our best “divination” of the answer to the questions put forward above is close to Hegel’s answer, some 200 years old.

Their ‘is-ness’ also contains their ‘is-not-ness’.

If we consider the “being” that is the universe as a whole in these terms, then the non-self/non-being ‘‘‘contained’’’ in/by such a being might be construed ‘‘‘synchronically’’’, as meaning that it ‘‘‘contains’’’ the space-content presently outside of itself; that that outside somehow “re-enters” that being’s/[it]self’s inside.

But when it comes to the cosmos as totality, which, by definition, has no outside, this supposed ‘‘‘outer’’’, ‘‘‘synchronic’’’ source of ‘intra-duality’, by definition, does not exist, unless we mean by it non-existence itself/in-general:  a kind of abstract, absolute nothingness as the non-existence that is [the] outside [of] the universe, i.e., the outside of everything.

A more apt rendering sees that internal otherness, or ‘self-antithesis’, which such a being/‘‘‘[it]self’’’ presently, hiddenly ‘‘‘contains’’’, as a ‘‘‘diachronic’’’, temporal, historical matter.