A ‘Cumulum’ is NOT a “Hierarchy”. GLOBAL STRATEGIC HYPOTHESES.

A ‘Cumulum’ is NOT a “Hierarchy”.  GLOBAL STRATEGIC HYPOTHESES.

GLOBAL STRATEGIC HYPOTHESES:  The ontologically-plural -- ‘multi-ontic’ -- ‘cumula’ about which we of F.E.D. write, and which are mapped by the ‘meta-equation meta-models’ formulated in our NQ_ ‘algebra for dialectics’, are most decidedly NOT “hierarchies”.

Legion are the agents of the presently still-ruling faction of the ruling plutocracy -- the ultra-bloodthirsty ‘Rocke-Nazi’ faction, who, indeed, do rule by “hierarchy” -- e.g., those agents who masquerade as scientists, are quick to tell you, to chant to you like a mantram, every chance they get, every chance that the ‘Rocke-Nazi’ “main stream media” gives them, that all of Nature is a “hierarchy”, that all of evolution is a “hierarchy”:  that “hierarchy” is “natural”, implying, of course, that democracy is “unnatural”.

They, and their ‘Rocke-Nazi’ masters and employers, want you to believe that even the limited form, the bribery-corrupted, “lobbying”-corrupted form, of “representative” democracy that still persists in the North America and in Western Europe, is “unnatural”, let alone the deeper forms of democracy, such as those that we have discussed here under the name of ‘‘‘Equitism’’’.  All the while, the ‘Rocke-Nazis’ are concocting a “crisis” whereby they plan to rip away even the remaining veneer of that “representative” democracy, and impose their police-state, “people are pollution”, “Eugenics”, Orwellian, ‘humanocidal’ dictatorship, their ‘FINAL SOLUTION TO THE HUMANITY PROBLEM’.  You can pick up the hints of the ‘Rocke-Nazis’ plans, in even just a sampling of the public pronouncements, regarding “95% population production”, of their many agents, some of whose grisly statements are compiled here --

Only, now, the ‘Rocke-Nazi’ faction’s plans are being thwarted by the nascent Trump faction, an ironic, pseudo-“Republican” ‘re-naissance’ of the Roosevelt faction, the faction that the ‘Rocke-Nazis’ thought they had silenced forever, and the ‘Rocke-Nazis’, in response, have declared all-out media war against that rival faction of the ruling class.

The etymology of the word “hierarchy” has been associated with descriptions of the “ranks” -- of the “ranked echelons” -- of the angels.  But yes, those who push this word, and its meme, today, are, as we have seen above, “No Angels”.  The word has deep roots in Medieval Latin, and even deeper roots in ancient Greek, where it has been interpreted to mean “rule by a high priest”, from earlier connotations of “sacred leader”, or “a leader of sacred rites” -- hierós [sacred] + árche-in [to lead, rule].

Today, this word, from the experiences of the kinds of social relations that it describes, clearly connotes a milieu in which access to interaction is highly constrained and exclusive, e.g., such that a “lower” rank can interact only, at most, with the ranks immediately above and/or immediately below it, but is prevented/prohibited from interacting with ranks further above or further below its “station”.

But, contrary to “hierarchies”, the realities that we characterize by our term ‘cumulum’ involve spontaneously-arising ‘‘‘mixtures’’’ of the ‘‘‘logical individuals’’’ of all still-extant ontological “kinds”; minglements of the «monads» of many «arithmoi», in which individuals of all kinds, of all scales, can and do interact, yielding, in that process, ‘hybrid ontos’, ‘‘‘hybrid processes’’’, ‘hybrid eventities’.

The axioms of the NQ_ ‘algebra for dialectics’, and the computational dynamics of the ‘ontological-categorial progression solutions’ of the various variants of the Seldon Function of the q1, «arché» ‘meta-number’ value, reflect these realities. 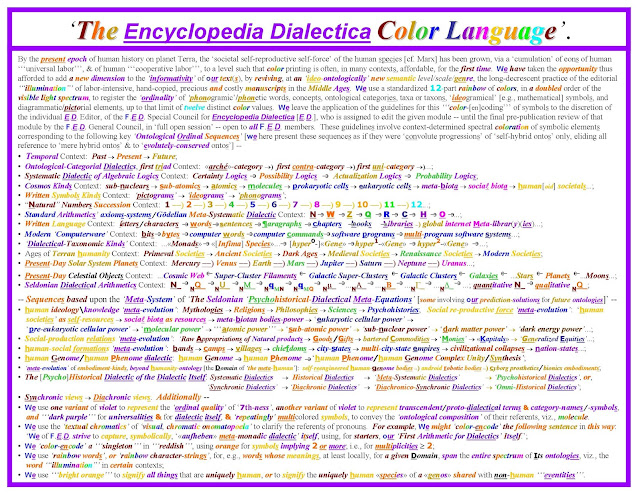 As texts articulating a ‘Universal, Dialectical Theory of «Arithmoi» of «Monads»’ [i.e., of Numbers of Units], these texts are ‘content-structured’ in the form of ‘text-module’, or ‘text-«monad»’, progressions, and thus exist within the scope of the examples and instances of that Theory itself, thus including ‘self-exemplification’ and ‘self-description’ in that scope. 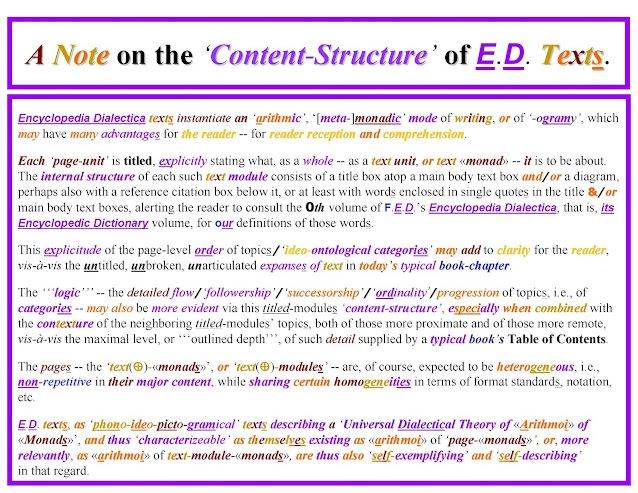 The text-image JPG, pasted-in below, addresses one of the Encyclopedia Dialectica [E.D.] standards for heightening readers’ awareness of ‘comprehended complexity’ in general, and of ‘ordinal complexity’ in particular, including in its superficial and misleading appearance as ‘‘‘visual cacophony’’’ and ‘chromatic chaoticity’.

This text-image JPG describes a technique of sensuously highlighting the ever-presence of ‘‘‘complexity’’’, in the form of what we term ‘interweaving ordinalities’.  This is related to our view that the key to the NQ system of arithmetic as the «arché»-system in the order of the Seldonian systems as arithmetics for dialectics is the character of its ‘meta-numerals’ as ‘ordinal qualifiers’. 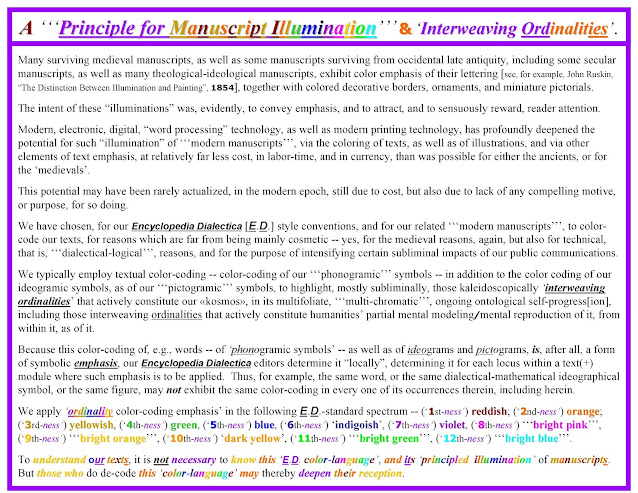 The text-image JPG, pasted-in below, addresses the concepts-conveyance advantage-potential of the coordination of all three of the major modes of written human expression -- ‘phonogramy’, ‘ideogramy’, and ‘pictogramy’ -- when they are ‘co-marshaled’ and ‘co-mobilized’ to represent, in their separately special ways, one and the same core concept/category that is the focus of a given step of presentation. 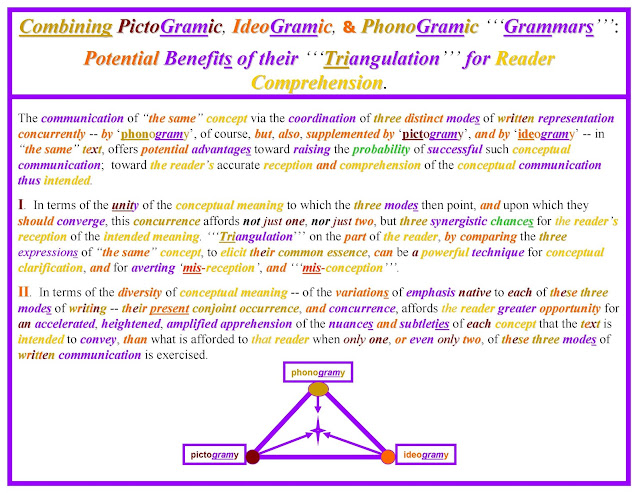