These are also the ontological categories to be addressed in the planned volume 1 of Encyclopedia Dialectica itself. 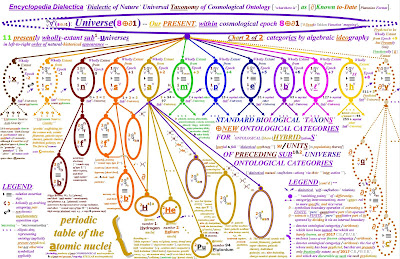 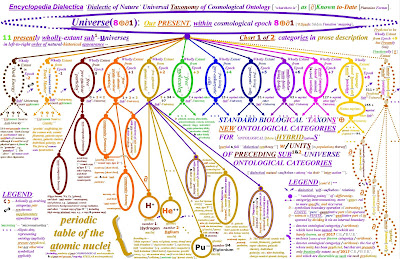 “...The “Dark Matter” ‘cosmological-ontological’ category, which we denote by c, standing for the ‘cosmological gravitic self-contractionary force’, is the ‘first contra-category’ of a version of our whole-«kosmos», ‘‘‘dialectic of Nature’’’ ‘meta-model’ that we are currently considering and exploring.”

“IT may be typical of ‘physi[c]o-[ideo-]ontological’[, as well as of “purely” ‘ideo-ontological’,] categories, as we have typically encountered them, in virtue of IT too representing an ontological «arithmos»-of-«monads», in that IT is [probably] -- and is expected to be, by the consensus of today’s physicists -- ‘multi-monadic’; ‘multiplicitous’, taking the form of a multitude of «monads»         / units / “particles”, i.e., of a cosmological “population”, albeit with a content probably residing outside of “The Standard Model of Particle Physics”.”

“ITs [we hold] predecessor ‘cosmological-ontological’ category, that of “Dark Energy”, we are exploring, in the same candidate version of our whole-«kosmos», ‘‘‘dialectic of Nature’’’ ‘meta-model’, as today’s deepest-¶known «arché» ‘cosmological-ontological’ category, in that same, presently most advanced, if still speculative, of our ‘dialectical meta-equation meta-models’ of ‘‘‘the dialectic of Nature’’’ as a whole.  We denote this candidate «arché» category by x, standing for the ‘anti-gravitic self-expansionary force’ of our cosmos as a whole.”

“IT may turn out to be atypical.”

“IT may be the/an exception, in that IT may not be ‘multi-monadic’; ‘multiplicitous’.”

“The ‘cosmological-ontological’ category of “Dark Energy” may represent a ‘singleton «arithmos»’, thus contradicting the very meaning of the ancient concept of “«arithmoi»”.”

“IT may be so, e.g., unless further experiment upholds the developing view that physical space itself is better modeled as “granular”, i.e., as ‘multi-monadic’ [e.g., as ‘‘‘quantized’’’], rather than being better modeled as a “CONTINUOUS” multi-dimensional manifold.”

“If so, then x might be seen -- or might be ‘seeable’ -- as a self-proliferation of the ‘units of space’, i.e., as an oft-acceleratory [including sometimes superluminally so] self-expanding self-reproduction of the ‘monads of physical space’ itself. ...”

“... The ‘‘‘method of this madness’’’ of the Q_ arithmetics / algebras for dialectics are not so hard to understand if you already know, or if you come to understand, that categories, and that their individuals, or units, e.g., that, to use their ancient names, «arithmoi», and their «monads» -- in short, ‘kinds of [ev]entities’ -- are fundamental to human cognition about realities, both those internal to us, and those external to us...”

“The «monads» -- ‘‘‘units’’’ in the ancient sense -- that, mentally, we represent collectively by their abstract «arithmoi» -- ‘‘‘numbers’’’ in the ancient sense -- are typically ‘multi-qualitative’, ‘multi-predicate’ units in the full regalia of their physical, sensuous embodiment.  They are sensuous units, present in multiplicity as ‘‘‘populations’’’ of ‘‘‘individuals’’’.  Each kind of such individuals collectively constitutes, e.g., a specific «species» ontological category, but not limited to biological «species» categories alone.

They constitute the level of «species» as a multiplicity of “higher” [more abstract, more ‘gene-ral’] units in their own right; as ontological-categorial ‘super-units’, made up out of their respective «monads» as their [sub-]units.”

“The ‘‘‘individuals’’’ units are thus generally not like   “1”, or ‘‘‘the 1s’’’ -- the modern, ‘hyper-abstract’, “purely”-quantitative ‘‘‘unit(s)’’’, of the “Natural” numbers, N, i.e., 1, 2 [= 1 + 1], 3 [= 1 + 1 + 1 ], ... \|/, wherein ‘\|/’ is a variable representing the highest positive integer expressible by the digital computer that we are presently using to facilitate and augment our present dialogue, or, more precisely, our present ‘multilogue’.  For one thing, these units have ‘‘‘individual differences’’’, qualitative differences among themselves.  They are not posited, as with the ‘1(s)’ of N, in a propositionally self-contradictory manner, as (an) absolutely identical “unit(s)” (which are) somehow also distinct and ever present in multiplicity.

Such units, such «monads» are not, and cannot be, ‘‘‘inter-mutually identical / indistinguishable’’’.  They are mutually similar, which also means that they are mutually distinguishable, because of their differences.  But they are similar enough that some humans, with justification, classify them as belonging to, e.g., one single «species».

Note that the actual objects that we use the N to count -- each as a different one -- are more like the former units or «monads» -- e.g., every individual actual apple has a multiplicity of concrete «differentia», different blemishes, etc., with respect to every other concrete apple, even if that other is of the same exact variety -- than they are like the units of the latter.  We have to deny / ignore / negate / abstract-from these «differentia» in order for such a count to be true, in order for the number assigned as their quantity to that multitude of actual objects to be exact for us.”

“The Q_ method elides any detailed description of the individual «monads», including of their movements, from explicit representation, and follows, instead, the ‘‘‘ghosts’’’ of those “departed”-by-abstraction «monads».  It does so by explicitly following, instead, the movements of their «arithmoi», i.e., of their several «species», etc., that is, the movements of their ontological categories, leaving the «monads» that constitute those categories unmentioned, for the most part.”

“It does so, because of human-cognitive limitations; because naked human cognition, unaided by, e.g., our digital and our trans-digital computers, that may encompass ‘‘‘multi-agent simulations’’’ involving, typically, myriads of «monad»-agents, each one encoded in considerable detail, cannot track such multitudes of «monads».”

“It is, after all, interactions of the «monads» themselves that, at this level of description, produce the results that each Q_ categorial calculus ‘‘‘covers’’’ and summarizes.”