Dialectic of human Nature Overall -- A Specimen from Marx, in "Capital", volume I.


Dialectic of human Nature Overall -- A Specimen from Marx, in Capital, volume I.

Pasted-in below, for your information and enjoyment, is an E.D. [Encyclopedia Dialectica] ‘dialectogram’ diagram, representing an example of the overall dialectic of human nature that
was presented by Karl Marx in volume I of his «Das Kapital.».

Marx described this diachronic dialectic as follows:  “The foundation of every division of labour that is well-developed, and brought about by the exchange of commodities, is the separation
between town and country.  It may be said, that the whole economic history of society is summed up in the movement of this antithesis.  We pass over it, however, for the present.”

1.  «arché» category -- The Terran human[oid] «species» began, to our best present knowledge,
as extended-family-based “bands” of nomadic co-hunting, co-gathering, co-foraging, & co-scavenging Appropriators of products of ‘exo-human’ Nature in their “raw” forms, without even ‘proto-Urban’ settlements, until semi-settled, multi-band “camps” irrupted.

2.  contra-category -- Emergence of human ‘Urbanicity’, from out of the womb of a once
all-pervasive ‘Rurality’, begins with the “camps” social formations, progressing through villages, chiefdoms, & city-states epochs, all the way up to our present, nation-state-subsumed
formations of Urban “metropolises” & “megalopolises”.

3.  uni-category -- We see this ‘socio-ontological category’ as not yet fully extant presently, but only fractionally so.  Perhaps suburbanism is its most prominent present-day fractional «species».  In a post-capitalist future, we foresee formations of ‘connected communities’, based, e.g., in coalitions of ‘Citizen Stewardship Equity’ socialized producers’ cooperatives, with their cores housing advanced 3D printers’ ‘omni-fact’ factories, & ‘omni-com’ surround-screen tele-conference rooms, for larger ‘tele-meetings’, & also supplied by robotized trucks & airborne drones, helping make for  “a more equable distribution of population over the country.” [Marx and Engels].


Both Marx and Engels, in both their joint and their separate writings, touched repeatedly upon this dialectic of city versus countryside.  One very early [1845-1846] case of such joint exposition is the following --

“The greatest division of material and mental labour is the separation of town and country.  The antagonism between town and country begins with the transition from barbarism to civilization, from tribe [F.E.D.:  chiefdom] to [F.E.D.:  city-]State, from locality to nation, and runs through the whole history of civilisation to the present day . . .”

“The existence of the town implies, at the same time, the necessity of administration, police, taxes, etc., in short, of the municipality, and thus of politics in general.  Here first became manifest the division of the population into two great classes, which is directly based on the division of labour and on the instruments of production.”

“The town already is in actual fact the concentration of the population, of the instruments of production, of capital, of pleasures, of needs, while the country demonstrates just the opposite fact, isolation and separation.”

“The antagonism between town and country can only exist within the framework of private property.  It is the most crass expression of the subjection of the individuals under the division of labour, under a definite activity forced upon him -- a subjection which makes one man into a restricted town-animal, the other into a restricted country-animal, and daily creates anew the conflict between their interests.” [Karl Marx, Frederick Engels, The German Ideology, Progress Publishers [Moscow:  1968], p. 65]. 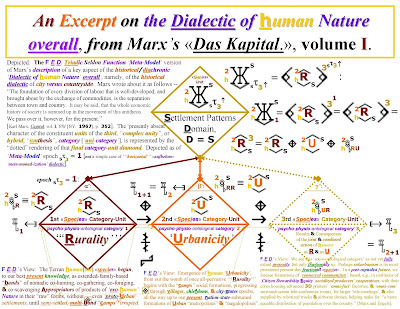 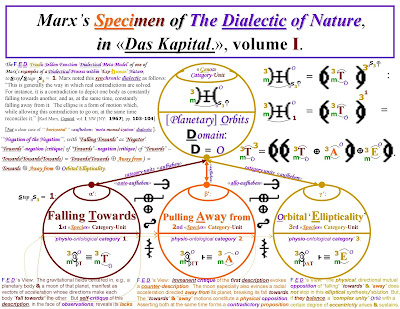