It is my pleasure to share with you, from time to time, selections from the seminal sayings, and writings, shared by him among we of F.E.D., by our co-founder, Karl Seldon [main site:  www.dialectics.org ].


Such is the following --

“ ... ‘‘‘horizontal’’’, [psycho]historical, or diachronic, ‘‘‘dialectical agebra’’’ is, for us -- in our interpretation -- a matter of ‘categorial combinatorics’ by way of ‘monadic combinatorics’.”

“That is, certain sub-groups of the units of a given ontological category -- i.e., kind-of-being category -- create, in [and as] time, via their expanded self-reproduction, conditions wherein and whereby they coalesce.”
“They coalesce into a new kind of being, a new kind of ‘‘‘meta-’’’units, in the sense that each new-kind unit is made up out of the multiplicity of the former units of one of those sub-groups of the former kind-of-being -- i.e., the former kind-of-unit -- of the given category, the earlier category, the first category that we mentioned above.”

“The resulting new-kind, [‘‘‘meta-’’’]units then become the units that constitute -- and that are addressed univocally by the name of, or by the algebraic ideographic symbol for -- the successor category, a new category, a second category, ontologically different -- qualitatively different, in its content, in its meaning, in its subject-matter -- from the given, earlier, first-mentioned category.”

“Then, later still, some of the units of the given, first category combine with some of the [‘‘‘meta-’’’]units of this newer, second category.”

“We hold that every major existent of our cosmos, including every major kind that has ever existed in our cosmos*, whether it still exists in our present epoch, or whether it once existed, but has ceased to exist by now, and -- we expect -- that everything that will ever come into existence in our cosmos in the future, will arise by such -- by [‘‘‘meta-’’’ or ‘‘‘self-’’’]combination of the «monads» or units that are within, and constitutive of,  a single category, or by the combination of the qualitatively different units of two or more qualitatively, ontologically distinct categories, or by combinations of such combinations. ...”

*E.D. Editors:  “We cannot yet assert this contention with clarity with regard to the ontological categories of so-called “Dark Energy” and “Dark Matter”, since they presently remain uncertain as scientific categories -- that is, they are scientifically uncertain categories whose empirical content remains largely unknown.” 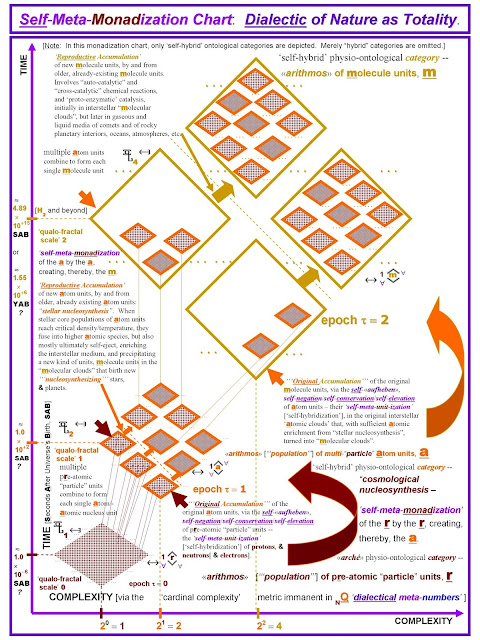