On the Potential ‘Gene-rality’ of ‘Dia-Gram-matical’ Representations of Mathematical Objects and of Other Conceptual Objects.


On the Potential ‘Gene-rality’ of ‘Dia-Gram-matical’ Representations of Mathematical Objects and of Other Conceptual Objects.

The text-image JPG, pasted-in below, addresses the potentially rigorous generality of diagrammatical representations of mathematical objects, and of other conceptual objects, in the voluminous writings of the ancient Greek mathematicians, and per the ‘Dialectical Dia-Gram-mar’ of Foundation Encyclopedia Dialectica [F.E.D.], as applied in its forthcoming Encyclopedia Dialectica, and in its other writings. 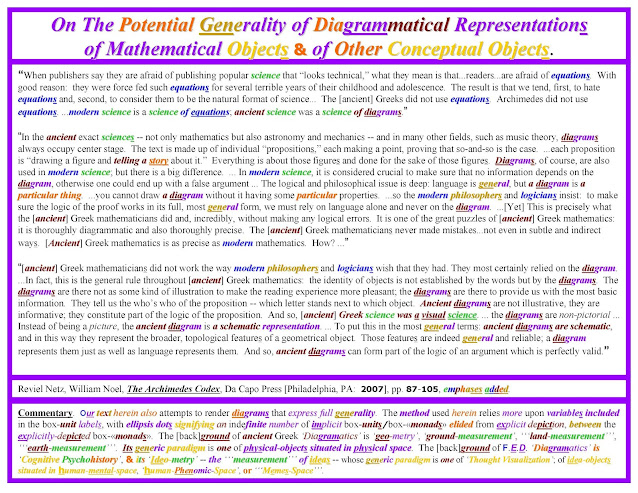 The ‘Unified Theory of Universal Dialectics’, developed and disseminated by Karl Seldon, and by Foundation Encyclopedia Dialectica [F.E.D.], and promulgated especially in volume 0 of our core treatise, entitled A Dialectical Theory of Everything, evinces a recognition, and an integration, of both a ‘vertical-«aufheben», meta-monad-ological dialectic’ and/with a ‘horizontal-«aufheben», meta-monad-izing dialectic’.

The three images     /text JPGs, pasted-in below, focus especially on the ‘vertical-dialectic’ aspect of that ‘Unified Theory of Universal Dialectics’. 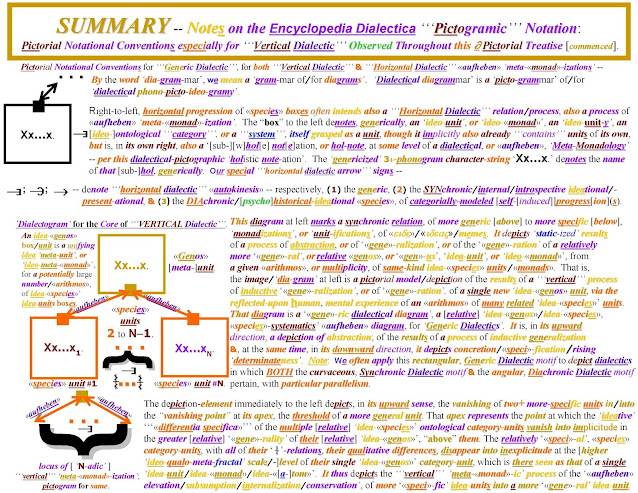 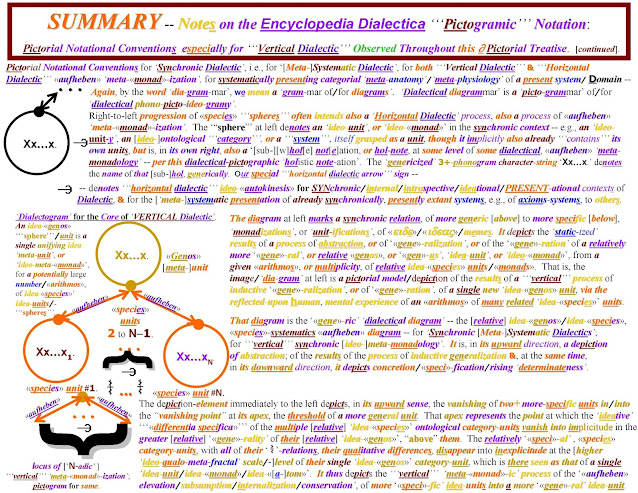 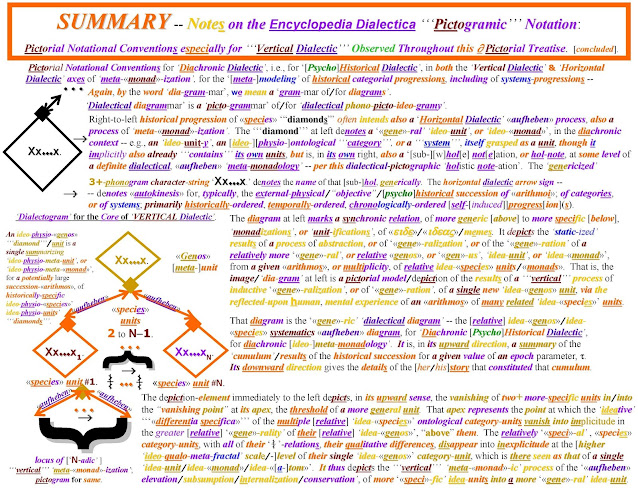 The quoted passage by Leibniz, rendered below, may be, if anything, even truer today than it was when he wrote it, circa 1690 C.E./B.U.E. 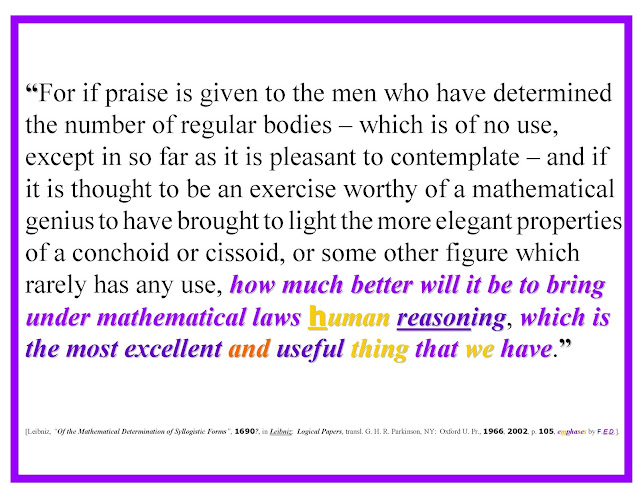 ‘The Systematic Dialectic of Francis Bacon’s three Species of Science, circa 1620 C.E./B.U.E. --

The case of the Philosophical Domain of the early modern, Baconian, Triadic classification of The Species of Science, propounded in 1620 C.E./B.U.E., may also count as yet another case of possibly inadvertent dialectical ‘content-structure’ in the work of a philosopher -- in this case, in the work of an early modern philosopher about then-nascent Science, one who is still considered a founder and/or a harbinger of modern Science.

This hypothesis of inadvertence must, however, confront the fact of the still widespread, albeit pre-Hegelian exposure of philosophers of Bacon’s time and clime to the ancients’ philosophical views regarding dialectic -- most prominently, to the views thereupon of Plato and, especially, of Aristotle -- a fact which may cast some doubt upon this hypothesis.

The purpose of the ‘dialectogram’ pasted-in below is to note how well the formulation of Bacon’s taxonomy of Science as a ‘dialectical equation’, using the NQ dialectical ideography, generating a synchronic, systematic-dialectical, triadic ‘ideo-ontological’ categorial progression, fits Bacon’s meaning, in terms of its ‘«arché»-category + contra-category + uni-category’ paradigm.

The Systematic Dialectic of Bacon’s human scientists-types metaphor, is, herein, and in the ‘dialectogram’ below, mapped by a triadic Seldon function NQ dialectical model equation with but one triadic step.

Francis Bacon himself presented this metaphor as follows:

“Those who have handled sciences have been either men of experiment or men of dogmas.”

“The men of experiment are like the ant, they only collect and use; the reasoners resemble spiders, who make cobwebs out of their own substance.”

“But the bee takes a middle course:  it gathers its material from the flowers of the garden and of the field, but transforms and digests it by a power of its own.”

“Not unlike this is the true business of philosophy; for it neither relies solely or chiefly on
the powers of the mind, nor does it take the matter which it gathers from natural history and mechanical experiments and lay it up in the memory whole, as it finds it, but lays it up in the understanding altered and digested.” [Cf. Hegel, 2nd jpg, on the science sourcing of his philosophy in general, and of his Logik in particular:  https://feddialectics-miguel.blogspot.com/2018/08/the-ockahamian-systematic-dialectic-of.html].

“Therefore from a closer and purer league between these two faculties, the experimental and the rational (such as has never yet been made), much may be hoped.”

Bacon notes, in the quote above, that his category of Bees-like Science constitutes a middle way between the [extreme] category of Spiders-like Science and its opposite extreme category of Ants-like Science.  One might even conjecture that Bacon, in formulating this “aphorism”, had Aristotle’s “Doctrine of the Mean” in mind.  For more about this, see --

We think that Bacon's '''prediction''', in the last line of the quote from him, above, has since come quite abundantly true.

First Species Category, denoted by S.  This species of Science should almost be classed as non-science.  It represents speculation, however logically rigorous, but ungrounded even in “in vivo” experience/empirical observation, let alone in “in vitro” designed experience, or experiment.  It means rigorous deductions, but from empirically false, fanciful, or phantasy postulates.  Ancient examples include Aristotelian “science”, e.g., the “physics” of Aristotle.  Contemporary examples include Cantorian “Platonic” set theories, that assume “actual infinities”, which cannot be constructed, or identified with any externally evident or introspective aggregate or magnitude that can actually be exhibited or experienced.

Second Species Category, denoted by A.  This species of Scientist abdicates the explanatory, theorizing function, and duty, of Science.  It founders on the accumulation of “facts” and “data” without any effort, or without sufficient effort, to understand how the “facts”, so collected, interlock, or as to what unifying mechanism, or ‘‘‘organism’’’, generates all of this, apparently disparate, “data”.  Ancient examples include Diophantus of Alexandria’s large, proto-algebraic, proto-ideographical scroll(s), entitled «Arithmetiké» -- translating as ‘‘‘art/craft/technique/technology for «Arithmoi»’’’, i.e., for “numbers”, in the ancient, ‘qualo-quantitative’ sense, as opposed to in the modern, “purely”-quantitative sense.  This text survives into today as a vast, pioneering but poorly-organized “cook-book” of multiplicitous, disparate algebraic-equation solution techniques, with little conceptual or theoretical unification.  Contemporary examples of A-type Science include standardized statistical multiple regression modeling, e.g., in business applications, perhaps utilizing vast stores of data, but without any “structural” inquiry into the causation of the correlations           /associations so detected.

Third Species Category, denoted by B.  This species of Science unites the rigorously deductive, theorizing, and explanatory traits of species 1, with the “data”/“fact” gathering, evidentiary and empirical bent of species 2.  The classical example of this powerful unity is Newton’s scientific method in his three-volume treatise «Philosophiae Naturalis  Principia Mathematica» [Mathematical Principles of Natural Philosophy]; the widespread gathering of records of the known phenomena of motion, so as to induce axioms as to the laws of motion, & then, from those axioms, to deduce again, & to calculate in detail, those phenomena, plus other, new phenomena, including predicted phenomena that are later observed to manifest as predicted, to an excellent degree of approximation [with some exceptions, e.g., for the observed perihelion shift of planet Mercury].

This example is not, to our lights, a clear case of ‘‘‘horizontal’’’-«aufheben», synchronic, systematic or presentational ‘meta-unit-ization’ dialectic.  It is, however, a clear and standard case of ‘‘‘vertical’’’-«aufheben» ‘meta-unit-ization’ dialectic, for the three «species» categories as units in their own right, fused, by ‘«gene»-ralization’ -- the abstracting-away of their «differentia specifica» -- into the single category-unit of their «genos». 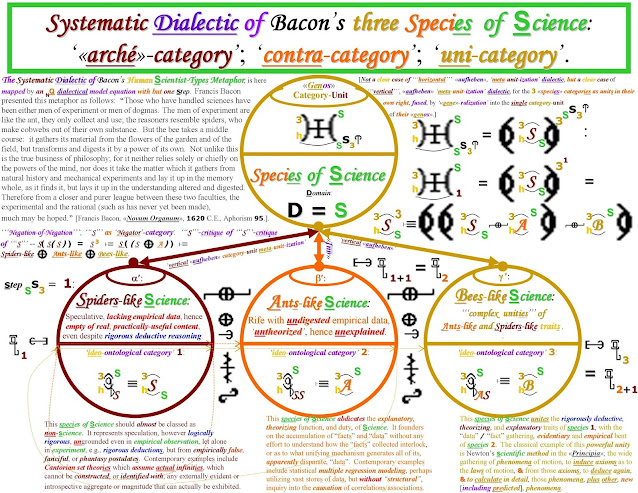