‘The Ockhamian Systematic Dialectic of The Sciences, c. 1323 C.E., EXTENDED --

The case of the Philosophical Domain of the late Medieval, Ockhamian, Dualistic classification of The Sciences, propounded circa 1323 C.E., may also count as yet another case of possibly inadvertent dialectical ‘content-structure’ in the work of a philosopher -- in this case, in the work of a medieval philosopher whose views still register within the modern “Philosophy of Science”.

This hypothesis of inadvertence must, however, confront the fact of the widespread exposure of philosophers of Ockham’s time and clime to ancient philosophical views regarding dialectic -- most prominently, to the views thereupon of Plato and, especially, of Aristotle -- a fact which may cast some doubt upon this hypothesis, especially if, as in some still-extant traditions, "dialectic" is restricted to the moment of opposition, or of antithesis, between two related terms.

The medieval philosopher William of Ockham, circa 1323 C.E., developed a binary taxonomy of the sciences, rooted ultimately in a binary ‘taxonomy of words’, one that harks back to ancient Stoic philosophies of language.

The purpose of the ‘dialectogram’ below is to note how the formulation of Ockham’s taxonomies in a ‘meta-equation’, via the NQ dialectical ideography, as a systematic-dialectical ‘ideo-ontological’ categorial progression, when it is iterated one step beyond the 2 categories of science posited by Ockham, yields what we solve herein as a ‘pre-construction’, or ‘‘‘prediction’’’, of the ‘meta-science’ species of ‘‘‘Psychohistory’’’, Y, via two sub-species of that species, a species of science that is still only nascent, and only ‘fractionally present’ today.

Regarding Ockham’s philosophical taxonomy of the sciences, W. L. Reese wrote as follows*:  “Ockham makes an important distinction between categorematic and syncategorematic terms.  Most common nouns are categorematic, while words such as “not”, “all,” and “some” are syn-categorematic.”

“...On the basis of the distinction just mentioned, Ockham divides the sciences into two types.  Scientia rationalis, or rational science, is second intentional.  Logic is a science of this type.  Scientia Realis is first intentional.  Physics is an example of a science of real things.” *[W. L. Reese, Dictionary of Philosophy and Religion, Humanities Press, NJ: 1980].  ‡[cf. George Boole on “primary” vs. “secondary” propositions, in George Boole, ...Laws of Thought..., NY:  Dover Publications, 1958, pp. 52-53].

Suppose we denote the category for the world of real things by r.

Suppose further that we solve for r2 as r + t, with t denoting the category of “terms”.

If so, then t implies the presence of human[oid], self-and-other-aware, language-capable “things” -- “things” that have, from long ago, arisen via the brains-localized ‘self-reflexion’, the ‘self-involution’ [cf. Chardin], the bending [‘flex’] back [‘re’] upon itself [‘self’] of the ‘pre-self-aware’ world of real things, r, so that parts of the thereby-resulting ‘things-world’ ‘‘‘contain’’’ , in however distorted and omissive a way, “all” of it, if only via terms     /language.

¿What, then, happens if we, again, “square”;  if we, this time, square the result of our earlier squaring?

¿What if we solve for qtr in (r + t)2 = r + t + qtr + qtt as connoting the comprehension, explanation, mental appropriation, or mental assimilation of the ‘things-world’ by terms -- by language; by human collective “universal labor”; by the collective human mind, as  merged into ‘the human Phenome’?

Then the «arithmos» of all “true” [scientific consensus] propositions            /terms about real things forms the “extension” which represents the “intension” of the sciences of real things, » Ockham’s ‘‘‘«Scientia ReaLis»’’’.

If we then decide to solve for qtt in (r + t)2 = r + t + qtr + qtt as connoting the
self-comprehension, self-explanation, mental self-appropriation, or mental self-assimilation of the ‘terms-world’ by terms themselves, i.e., by language; by human collective “universal labor”; by the collective human mind, merged into ‘the human Phenome’, what next results?

This:  The «arithmos» of all “true” [scientific consensus] propositions about propositions; terms about terms, as found, e.g., in logic and mathematics, forms the “extension” which represents the “intension” of the sciences “of second intention”, » Ockham’s ‘‘‘«Scientia RatioNalis»’’’.

We may also denote this ‘‘‘«Scientia RatioNalis»’’’ by N, standing for that «arithmos»/category of such propositions as its units.

In sum, we have thus solved as follows --

In the first image pasted-in below, the ‘dialectogram’ image, we extend Ockham’s binary, dualistic taxonomy of the sciences, by ‘re-«arché»-izing on qtr, solved-for as L, and by then squaring L, thus generating The L critique of L itself as comprehending the entire known present Domain of the Sciences --

In the context of the foregoing ‘meta-equation’, we solve for the net result of N(L), namely qNL -- the ratioNal analysis/comprehension/assimilation of the system of propositions set forth by the sciences of the ‘‘‘«Scientia ReaLis»’’’ -- as connoting that portion of the still nascent ‘meta-science’ of ‘‘‘Psychohistory’’’, Y, whose propositions seek, critically, to explain the differences, the strife, the oppositions, including the ideological aspects, among the theories of the L sciences.

Likewise, we solve for the net result of N(N), namely qNN, the ratioNal analysis/-comprehension/assimilation of the system of propositions set forth by the sciences of the ‘‘‘«Scientia RatioNalis »’’’, as connoting that portion of the ‘meta-science’ of ‘‘‘Psychohistory’’’, Y, whose propositions seek, critically, to explain the differences, the strife, the oppositions, including the ideological aspects, among the theories of the N sciences.

-- Then what Y comes to stand for includes immanent critiques of ideology within the sciences in general; within all of the sciences -- an ‘ideo-ontological’ innovation that was pioneered by Karl Marx, in his four-volume treatise Capital, A Critique of Political Economy.

We therefore adopt the words of Tony Smith, and of Hegel, as quoted in the second image pasted-in below, to explicate why it is that we assert [‘|-’] N to be the correct definition [‘=’] for qLL in --

with qLL connoting the [propositional] self-reflexion of the L sciences upon themselves.

If our solution of (L + N)2  =  L + N + qNL+ qNN is coherent, it should also suggest a meaningful solution for all of the terms in, including the new terms in --

We will leave the explication of our solutions for those new terms, qNr and qNt, for another, later venue, leaving the problem, for now, in the hands of you, our readers.  Hint:  qNt has something to do with the ratioNal, scientific analysis of, and “accounting for”, the terms of “natural languages”, and qNr with the ratioNal, scientific analysis and explanation of our perceptions of “real” [esp. of physical] things. 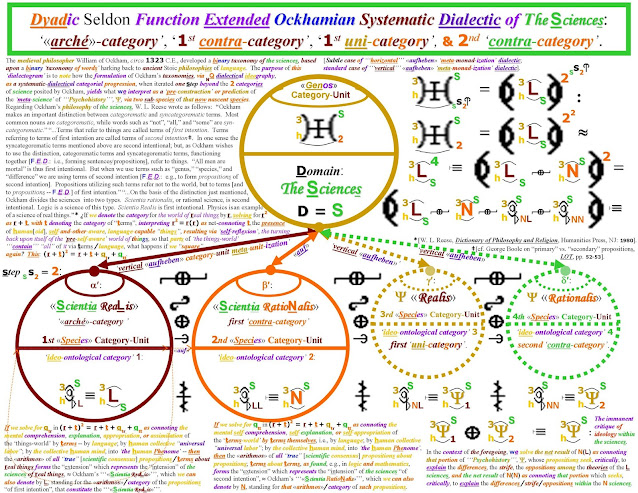 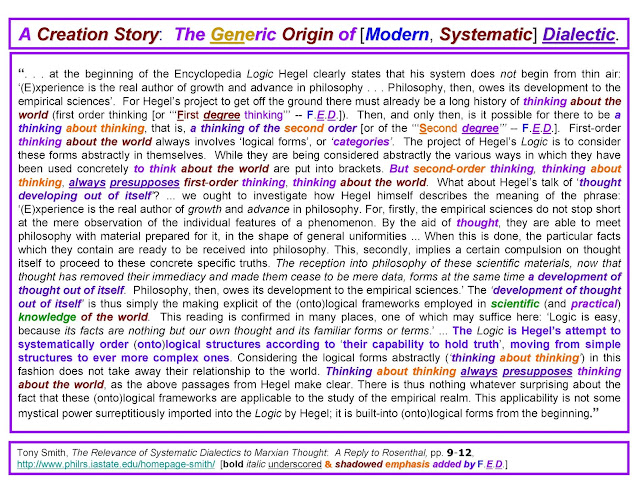