‘The Dialectic of Television Programming --

‘Dialectogram’: ‘A Systematic-Dialectic Method of Presentation for the Contemporary Domain of Television Programming’, First Triad.

The case of the Domain of Contemporary Television Programming -- a Domain of standard categories regarding the organization of Television Programs’ content -- can serve as one of the simplest, most accessible, most transparent -- if also one of the most trivial and prosaic -- examples of the categorial units’ ‘‘‘horizontal’’’ «aufheben» ‘meta-unit-ization’, or ‘meta-holon-ization’ [cf. Arthur Koestler], relation, which resides at the core of the Seldonian grasp of dialectics -- of systematic dialectics and of historical dialectics alike, but an example of systematic dialectics in this case.

This example is not valuable primarily for any new insights it may yield into the nature of contemporary Television Programming, but rather for its clarification of F.E.D.’s ‘universal algorithmic-heuristic dialectical method’, by way of applying it to the ‘‘‘systematization’’’ of a maximally familiar Domain for contemporary readers.

The triadic, Platonian-format ‘dialectogram’ below describes, in systematics order -- in consecutive, simplest to more complex order -- three categories of the Contemporary Television Programming Domain, which could form part of a dialectical, taxonomic, categorial-progression method of presentation of this Domain, were such needed.

To convey the dialectical -- or «aufheben» -- architectonic of these prosaic conceptual objects in the most direct way that we know of, we will here simply note the following.

¿But what possible third, ‘‘‘synthesis’’’ category for the second category of Seasons units and the first category of Episodes units could there possibly be?

For us, that combining category is that for the phenomenon of a single Episode Season, i.e., for single Episodes that also constitute and co-extend with a whole Season, e.g., in the atypical case of a planned, intended Series that is unexpectedly canceled after only the single, first Episode is aired.

This forms a category of Seasons that are exceptions to the definition of [typical] Seasons just given above, residing in the low-frequency-of-occurrence/-observation “left tail of the distribution” of Television Seasons’ Episodes counts, rather than in the modal central tendency of that distribution. 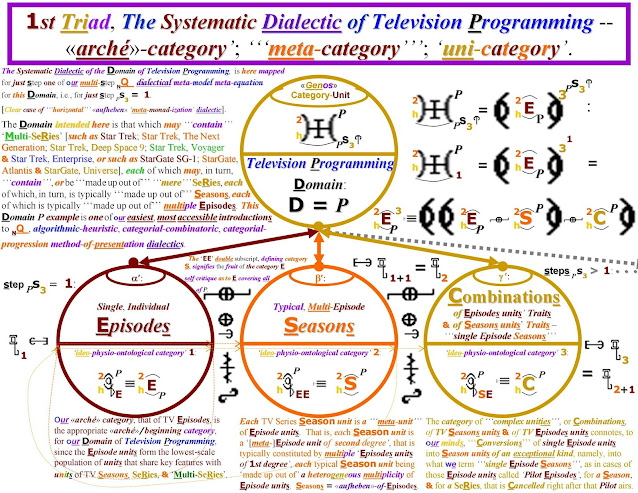