‘Dialectic of the Standard Arithmetics’ --

‘Dialectogram’: ‘The Meta-Systematic Dialectic of the Domain of the Standard Arithmetics’, First Triad.

This paradigmatic case of the ‘Goedelian Dialectic’, treated, in this blog entry, in its first triad of axioms-systems[-fragments] for standard arithmetics, can serve as yet another example of the failure of the contemporary mathematical sub-culture to recognize the ‘dialecticality’ of its primary thought-products, already latent and unconsciously present in its history, and in its present-day proofs as well.

The Triadic, Platonian-format ‘dialectogram’ below describes, in systematic order -- in consecutive, simplest to more complex order -- the first three axioms-systems, or Lakatosian ‘‘‘counter-example’’’ axioms-systems-fragments, as categories, needed for a systematic, dialectical categorial-progression method of presentation of the contemporary Domain of the “Standard”  arithmetics.

This Domain is thereby presented as a ‘synchronic meta-system’, made up out of a heterogeneous multiplicity of all-present predecessor-successor axioms-systems, i.e., as a presentational dialectical progression of axioms-systems for the “Standard” arithmetics, Domain, D = #.

In the above, “purely”-qualitative, “purely”-categorial equation, the term W denotes the axioms-system of the “Whole”-numbers “Standard” system of arithmetic, such that

The term a denotes the axioms-system-fragment of the ‘aught’-numbers, i.e., of the ‘‘‘zeros’’’, or of the set of all ‘self-subtractions’ of all “Natural” numbers.

The latter set is the “solution-set” for solving the simple, N-paradoxical, N-unsolvable “diophantine” algebraic equation x + n  =  n, for every n in N.  The latter equation transposes to --

The term qaN denotes the axioms-system-fragment for the integration, synthesis, or complex unity of the

“Standard Natural” numbers with the ‘aught’-numbers, with the latter as “placeholders”, in a “place-value” system of now “Whole” number ‘numeralics’. 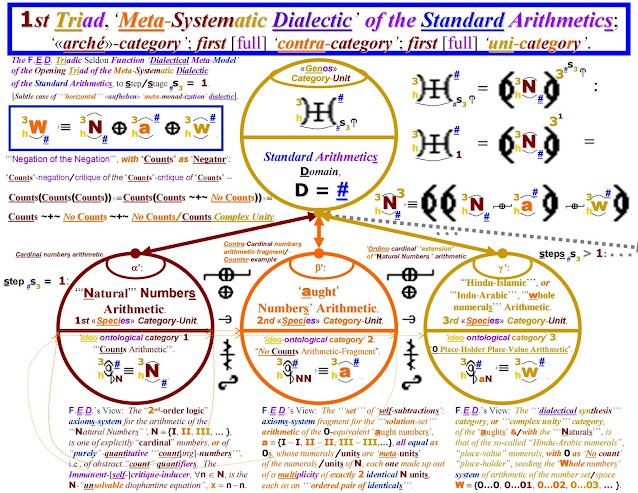