‘‘‘Solved/interpreted’’’ NQ_ ‘meta-model cumula’, up to, but not including, their ‘‘‘meristemal’’’, final terms, in cases of ‘Dyadic Seldon Function meta-models’, can be grasped as qualitative partitionings -- as discrete, ‘‘‘ontological’’’ partitionings -- & as apt namings, of the content of their associated “probability-density distributions”, or ‘‘‘expected frequency-of-encounter’’’ [with the given kind of «monad»] distributions.

These NQ_-algebra ‘meta-modeled’ ‘‘‘frequency-of-encounter distributions’’’ are generally expected to be ‘‘‘hyperbolic’’’ distributions, like the one depicted below, for the F.E.D. dialectical “theory of everything” -- the ‘‘‘dialectic of nature’’’ -- ‘meta-model’, where every successive term/ ‘categorogram’ represents an «arithmos» of «monads» with less zenith ‘onto-mass’ than do its predecessor ‘categorograms’.

Or, they are expected to be ‘‘‘exponential’’’ distributions, like those for many of the Seldonian ‘psychohistorical dialectical meta-equations’ --

In cases of ‘Triadic Seldon Function NQ_-algebraic meta-model meta-distributions’, each stage/epoch/step of advance completes the ‘real subsumption extantization’ of the discrete partitions/categories representing the content of the distribution for the latest-irrupted new ontology, with a dialectical ‘full synthesis’, or ‘full uni-category’, culmination.

The harbinger of the frequency distribution for the next-to-be-irrupted ontology begins only in the next epoch/step, in cases of ‘Triadic Seldon Function NQ_-algebraic meta-model meta-distributions’. 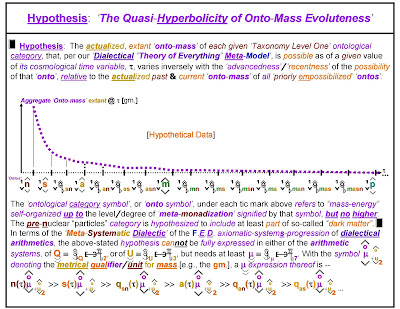 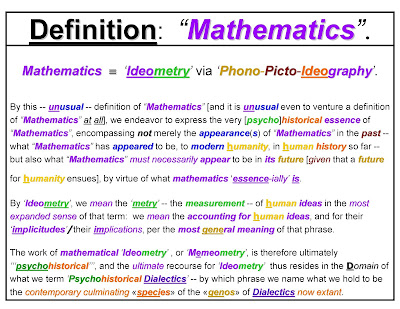 It is my pleasure to share with you, from time to time, the most effulgent excerpts from the scintillating sayings -- shared by him among we of F.E.D. -- of F.E.D.’s co-founder, Karl Seldon, such as the following [E.D. standard edits applied] --

“Within every moment, within every eventity, among every local «arithmos» of eventities, ‘intra-duality’ is at work, transforming the momentaneously apparently synchronic, into the diachronic, driving quantitative-into-qualitative, ontological change, hence driving time; constituting and reconstituting concrete duration with every increment of that [it]self-induced change[-of-[it]self].”

-- of very recent vintage, a saying which I have christened ‘Intra-Duality’ & ‘Diachronicity’.

ANNOUNCEMENT: ‘The Dialectical Analysis of Arithmetics’, in 3 Volumes.

F.Y.I.:  The General Council of F.E.D. has, today, assigned, to me, the preparation of a 3-volume treatise, to be entitled ‘The Dialectical Analysis of Arithmetics’, and to be published, by the F.E.D. Press, during the years 2017-2019, for the purpose of elaborating our solutions to three of our major Seldonian ‘meta-equations’, which give their individual names as the individual titles for each of these three volumes --

-- a task to which I look forward with great relish!

Marx addresses a special case of «aufheben»-conservation/subsumption processes in the [unpublished] so-called “6th Chapter” of «Das Kapital», in the context of the self-development of the [incarnated and ‘agented’ and reproduced by humans] capitals-system -- from an early ‘ascendance phase’ of that system, characterized by the ‘“[merely] formal subsumption of the labor-process under capital”’, toward a zenith, and then toward a ‘descendance phase’, of that system, increasingly characterized by the ‘“real subsumption of the labor process under capital”’.

An example of this progression from ‘‘‘formal’’’ to ‘‘‘real’’’ subsumption, in the context of systematic dialectics, is that for the simplest categorial-calculus dialectical ‘meta-model’ of Marx’s «Das Kapital» --

Formally, at step 2 of its presentation, its ‘‘‘Kapitals’’’ category already «aufheben»-subsumes its Commodities, Monies, and Money-mediated Circulations of Commodities [qMC] categories, by its mere, “additive” [‘+’], presence in this step, because K has become the new leading category, surpassing, hence subordinating and demoting, all previously-presented categories, in complexity, in thought-concreteness -- in determinateness -- and in aptness for the Domain [‘kapitalist society’] being presented, systematically, in «Das Kapital».

And yet, thereby, it has not yet presented the forms/categories which express the incorporation and integration of those three pre-evoked categories in[to] a self-reproducing system of [especially industrial] ‘‘‘Kapitals’’’.

So far, in presentation step 2, K connotes mainly the still present descendants of the early, pre-capitalism, “antediluvian species of capital” -- primarily mercantile capital -- which are confined to the Monies/Commodities Circulations-processes of social reproduction, but which do not directly re-organize and dominate its ‘productions-processes’ as well.

It is in step 3 of this ‘meta-model[ed]’ presentation that the ‘‘‘real subsumption’’’, by the ‘‘‘Kapitals’’’ category, of all of its earlier-evoked categories, arrives explicitly, in the form of the superposition [‘+’] of the categories ‘‘‘Commodity-Kapitals’’’ [qKC], ‘‘‘Money-Kapitals’’’ [qKM], and ‘‘‘Circulations of the Total Social Capital’’’ [qKMC].

An example of this progression from ‘‘‘formal’’’ to ‘‘‘real’’’ subsumption, in the context of [psycho]historical dialectics, is that for the hypothesis of Dr. Denise Schmandt-Besserat, regarding the first genesis of written language, in ancient Mesopotamia.

Early-on, per this hypothesis, temple dues contributions, as well as debts, were recorded via fired clay token ‘micro-icons’, that represented individual units of specific kinds of goods donated/owed, tokens which were kept together, late in the ‘meta-evolution’ of this accounting praxis, by depositing them into hollowed-out wet clay envelopes, envelopes that were later fired.

Because these clay envelopes were opaque, auditing a debt, or a tithe, required breaking open the envelope containing the record thereof, and, thereafter, also required the labor of creating a new envelope to re-house the tokens representing that record.

Thus was born a new ‘meme of representation’ -- of 3-dimensional objects [e.g., the fired clay tokens] by “2-dimensional” marks in clay.

For a long time, a dual, redundant representation system persisted -- token-marks on the outside of the clay envelopes, tokens full-blown inside those same clay envelopes.

This dual, redundant representation phase represents the ‘‘‘formal subsumption’’’ phase, of the 3-D ‘tokenology’ meme, by the “2-D” ‘tokenography’ meme.

However, at a certain critical point, scribe-accountants stopped hollowing out wet clay slabs, to form them into clay envelopes, and, instead, molded those wet clay slabs into solid wet-clay tablets, upon which “2-D” marks were made by impression, and by ‘“incision”’.

This clay tablets stage instantiates the ‘‘‘real subsumption’’’ of the 3-D ‘micro-iconic’ representation meme, by the meme of “2-D” representation, and leads on to the full cuneiform system of writing.

In general, in NQ dialectical-algebraic terms, ‘‘‘formal subsumption’’’  is ‘sum-subsumption’, ‘additive [‘+’] subsumption’, or ‘superpositional subsumption’, by the content represented by the ‘‘‘meristemal’’’ category, for a given stage in, e.g., a Dyadic Seldon Function dialectical ‘meta-model’, of all of the earlier-‘extantized’ ontological-categorial content of that ‘meta-model’, via the ‘qualitative superposition’ processes signified by the NQ versions of the “plus sign” -- non-amalgamative, momentary/stroboscopic non-interaction-operation ‘separator symbols’, that sign the momentaneous formation of the ‘cumulum’ of ontologies present for that stage, just prior to the inception of the category-interactions/-multiplications that generate the successor stage/‘cumulum’ representation.

In general, in NQ dialectical-algebraic terms, ‘‘‘real subsumption’’’  is ‘multiplicative subsumption’, or ‘product subsumption’, and ‘[allo-]hybridization subsumption’, by the content represented by the ‘‘‘meristemal’’’ category-symbol, for a given stage in, e.g., a Dyadic Seldon Function dialectical ‘meta-model’, when it generates its incremental symbols for the next-stage ontology representation, via that ‘‘‘meristemal’’’ category-symbol ‘ontologically-multiplying’ itself against/interacting with, the category-symbols representing all of the content of the earlier-‘extantized’, and still-[possibly-]extant, ontological-categorial content of that ‘meta-model’ that is represented in the given stage’s ‘cumulum’.