GLOBAL STRATEGIC HYPOTHESES:  'Stealth Humanocide' -- We have addressed here, already, in earlier blog-entries, and we plan also to address further, in the future, the machinations of the ruling, 'Rocke-Nazi'/"Eugenics" faction of the ruling class, and of their 'Shadow Laboratories', in engineering 'Stealth Humanocide', for as long as they still lack the full, totalitarian, police-state power to impose multiple genocides openly -- e.g., for as long as part of the American working/middle class is still armed -- as did their erstwhile 'Servant Dictator', Hitler, in his initially 'Rocke-Nazi' designed, and 'Rocke-Nazi' funded, 'Eugenics Camps'.

We have pointed out the Rocke-Nazis' stealth engineering, with the help of their 'Shadow Laboratories', of the Alzheimer's Disease Epidemics, of the Autism Epidemics, and of the Obesity/Diabetes Epidemics, e.g., in the U. S., that are destroying the future of America.

We have noted also how, in Germany, over 2000 schools are closing annually, for lack of children.

The focus of today's blog entry is the recently-noted rising rates of mortality among caucasian, college-UN-educated males and females in the 45 to 54 years-of-age demographic -- a group whose despair has been stealthily engineered by the Rocke-Nazi plutocracy, via their programs of "rust belt" de-industrialization and social auto-cannibalization in the U.S.

[RT America]:  "White middle-aged people in US dying quicker than in any other developed nation – Princeton study"

"Nobel Prize-winning scientist Angus Deaton and Anne Case have come out with shocking conclusions that white middle-aged Americans are the only first-world group of people dying faster than their counterparts in any other developed country."

"According to them, this is due to an out-of-control alcohol and drug habit, as well as suicide and depression."

"Researchers have described this as an “epidemic” that threatens the fabric of future America."

"The research by economists Deaton and Anne Case, published in the Proceedings of the National Academy of Sciences, follows another paper of theirs from 1999, where questions were raised regarding the relationship between income and mortality."


READ MORE: 'America is a bomb waiting to explode'

"The worrying trend has been developing since 1998, when mortality rates for 45-54 year-old Americans suddenly jumped."

"Worryingly, the exact reasons remain unclear." [M.D. -- Not if you know the Rocke-Nazis, and their "Eugenics" agenda!].

"Experts could only determine a correlation with a rise in the availability of prescription drugs – such as painkillers – as well as a marked shift toward heroin use."

"On top of this there was the steady economic deterioration of the last 20 years, Deaton suggests."

"Since that year, some half a million Americans were killed by HIV/AIDS."

“Only HIV/AIDS in contemporary times has done anything like” what the authors describe for the other contributing factors, the report said.


"Addictions are hard to treat and pain is hard to control, so those currently in midlife may be a 'lost generation' whose future is less bright than those who preceded them," the authors said."

"Increased availability of opioid prescription drugs, chronic pain (for which opioids are often prescribed), and the economic crisis which began in 2008 may all have contributed to an increase in overdoses, suicide, and increased liver disease associated with alcohol abuse."

"In the decade from 1978 to 1998, mortality rates were dropping, much like in any well-developed Western nation."

"But at the tail-end of that period, mortality began rising by half a percent every year."

"For those with a high school degree or less, deaths caused by drug and alcohol poisoning rose fourfold; suicides rose by 81 per cent; and deaths caused by liver disease and cirrhosis rose by 50 percent," Deaton and Case said."


"In some sort of nightmarish fashion, organ damage was combined with rising depression, inability to relate to others and various other forms of pain – bringing with them often an inability to work."
[M.D. -- All in exact accord with the Rocke-Nazi "Eugenics" blueprint!]

"The authors even found a strict rising correlation between the number of people reporting mental illness and the number reporting that they had difficulty in socializing with others."

"Despite popular speculation, obesity – which was also on the rise – was not viewed as a prime contributor to the trend." [M.D. -- That obesity epidemic is just another of the Rocke-Nazis' many, parallel "Eugenics" humanocide pogroms -- sorry -- programs!!!].

“All-cause mortality rose by 22 percent for this least-educated group. [emphasis added by M.D.].

Those with some college education saw little change in overall death rates, and those with a bachelor's degree or higher actually saw death rates decline.”

"The broad conclusion here is that the government should really change its attitude to prescription drug policy, but that alone would be a fraction of the story, as social and economic factors undoubtedly feed into the compounded effect, Deaton and Case said."  [M.D. -- All as so carefully orchestrated by the Rocke-Nazi plutocracy!!!].

"Deaton’s and Case’s research represents the most comprehensive and thorough study of the aforementioned relationships, and how these relationships contribute to mortality among Americans."

"To arrive at their conclusion, the authors used data from the CDC, individual death records and a slew of national surveys on population and mortality." 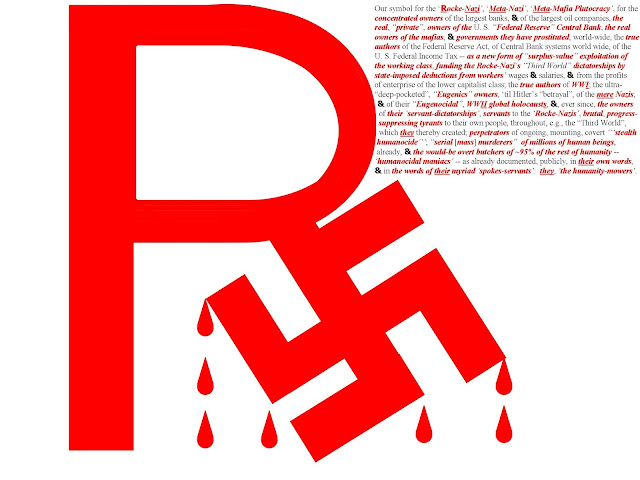