Part III. A.:   Interlude.  The Dialectic of TV Series.

Systematically Presented via a 4-Symbol Expression.

The dialectical model presented in this blog-entry is an ‘ultra-simple’ example of such models -- is literally a “trivia[l]” example -- a dialectical model of the systematics of television programming “trivia”.  But that is, precisely, the whole point of this example:  to dialectically model something so simple and so well known, that the core of the F.E.D. dialectical modeling method will thereby become transparent to the reader.

No “domain expertise” is required of the reader, in order to understand the content of this model, beyond that which is spontaneously learned in the course of following contemporary TV Series, e.g., via broadcast network TV, and/or via cable TV, and/or via satellite TV, and/or via internet video streaming, etc., etc.

Herein, we will use the F.E.D. ‘first dialectical algebra’ to construct and “solve” a “heuristic”, ‘intuitional’ model of a ‘‘‘systematic presentation’’’ of the principal entities/phenomena encountered in the domain of ‘TV Series’.

Herein we mean, by the word, ‘‘‘systematic’’’, in the phrase ‘‘‘systematic presentation’’’, a presentation of the major kinds of “entities” that exist in this domain -- by means of categories that classify those entities by their “kinds”, i.e., as ‘‘‘ontology’’’, or as “kinds of things” -- and in strict order of their rising complexity, starting from the simplest category, and moving, step-by-step, from lesser to greater complexity, until we reach the most complex category that presently exists for this domain, or for the purposes of this example.

The model that we will build will generate these categories in that strict, systematic order of rising complexity.

Our model here will not be a “chronology” model --  “diachronic” model -- like the previous, major model, narrated in this series, in which the units of earlier categories are described as actually, e.g., physically, constructing, through their activity, as “causal agents”, or as “subjects”, the units of later categories, categories whose units did not exist until that construction took place.

We will apply a documented, standard procedure to “solve” this model -- to determine what actual category each of these generated category-descriptions refers to, and to determine which, if any, of these category descriptions describe “empty categories”, representing ‘combinatorially’ possible entities that actually do not exist for this domain -- at least not presently.

To get started, we must determine the starting-point -- the point-of-departure -- for our systematic model.

This starting category will be the seed of our whole progression of generated category-descriptions, influencing every category that follows, as the “controlling source” and as the “ever-present origin” of all that follows from it.

The rule for getting started is to ask oneself “¿What is the least complex kind of thing, the simplest kind of thing, which exists in this domain?” -- in our present case, in the domain of ‘TV Series’ -- and then to find the answer to that question, based upon one’s prior knowledge of, or familiarity with, this domain of entities/phenomena.

The answer to this starting question that we will pursue in this example is the following:  The single “Episode” is the simplest ancestor, the ultimate unit of contemporary TV Series, ingredient in every one of the more complex units of that domain.

Therefore, the category which we shall name Episodes is our starter category, and we shall symbolize it, in our specific category-algebra model, via the first letter of that name, as E, or as qE, identifying that specific category with the generic first category symbol of our generic category-arithmetic, q1, in an identification, “interpretation”, or “assignment” [ ‘[---)’ ] that we indicate by writing:  E = qE  [---)  q1.

Our dialectical model then, will take the form of a dialectical equation, an equation between multiplicity and unity, that looks like this --

-- with the variable s indicating the step in our systematic presentation that the ‘accumulation of categories’, denoted by )-|-(s, represents.

Stage 1.  It is when we get to step s = 1 that our equation-model gives us something initially “unknown” -- something “algebraical”, rather than just “arithmetical” -- to “solve-for” --

Herein, q is the generic category ‘qualifier’.  The subscripts that come after it are specific category “descriptors”, category “predicates”, or category “epithets”.

¿But how do we “solve for” what the resulting, initially “unknown” -- hence “algebraic” -- category, or ‘category description’, here qEE, means?

Well, the generic rule to “solve-for” the categorial meaning of such symbols is that, if we know what is meant by category qx  =  x, then the symbol qxx describes a category each of whose units is an ‘x OF xs’, that is, a category for a different kind of units, called ‘meta-xs’, each such unit being made up out of a -- usually heterogeneous -- multiplicity of xs.

To be specific with this rule, qEE specifies a category each of whose units is an ‘Episode OF Episodes’, that is, is a ‘meta-Episode’, such that each ‘meta-Episode’ is made up out of a heterogeneous multiplicity of Episodes.

That category-description describes the category of ‘multi-Episode’ units -- of Seasons, i.e., of a usually yearly multi-Episode succession / ‘consecuum’, typically ending with a “Season Finale” final Episode for each Season.

Again, what is dialectical about the relationship involving E and E2, or  E x E, or EE, or E of E, or E(E), the relationship of what we call ‘meta-unit-ization’, or ‘meta-«monad»-ization’, between E and its already presently existing, ‘supplementary other’, S, is that this relationship is a synchronic «aufheben» relationship:  each single unit of the typical Seasons category being a negation, and also a preservation, by way of also being an elevation to the / forming the Seasons category / level / ‘qualo-fractal’ scale, of a whole [sub-]group of units of the Episodes category / level / ‘qualo-fractal’ scale.

Stage 2.  ¿What ‘category-specifications’ do we generate in our next step, step s = 2, that need “solving-for”?

2.  qa + qa   =   qa; the same category, added to itself, does not make “two” of that category; one “copy” of each category is sufficient; two or more copies of any category would be redundant.

3.  There is no qx such that qa + qb   =   qx, if a is different from b; different categories, added together [as opposed to being multiplied together], do not reduce to a single category, just as in the proverbial ‘apples + oranges’, or a + o.

Well, we already know how to “solve-for” qSS.

That category-description describes the category of ‘multi-Season’ units -- of TV “seRies” units, each typically ending with a “SeRies Finale” final Episode for each such SeRies, and which we therefore symbolize, this time, to avoid another S with a different meaning, via the third letter of its name, by R.

Our step s = 2 equation-model, as we have solved it so far, thus now looks like this --

-- since we still have not determined which actual category of the TV Series domain is described by the algorithmically-generated symbol qSE -- if any, i.e., if qSE is not an “empty category” for this domain.

-- generically speaking, the categorial relationship to be called to the user’s attention by this operation, in this ‘categorial arithmetic’, is, again, a synchronic «aufheben» relationship, this time between E and qSE.  It calls the user to search that user’s knowledge and memory of the domain in question -- in this specific case, the domain of TV programming -- for a category which represents an “uplift” of category E entities to the level of the entities native to category S, thereby “canceling” the E-type entities concerned, at their own native level, but, by the same token, “preserving” those “special” category E entities that qualify for this “hybrid” category, combining S and E qualities, in the relationship of “elevation” of those category E entities to within the level typical of category S entities.  Thus, the additional category thereby presented, qSE, signifies atypical E units, that “double as” S units, or that “masquerade as” S units, or that “exist in the way that, normally, only S units exist”.

In this specific case, this means that a unit of the qSE category is an Episode that “doubles for” a Season.

¿Do any such units, hence does any such category, actually exist, in the domain of TV Series?

Any one-Episode Season qualifies, e.g., an incipient Season, paused after its initial Episode of its initial Season, but resumed in its second Season, or, e.g., a multi-Season Series, with only one final Episode for its Final Season -- rare, exceptional events, no doubt, but I do not doubt that such things have happened -- at least once -- in the history of TV Series. 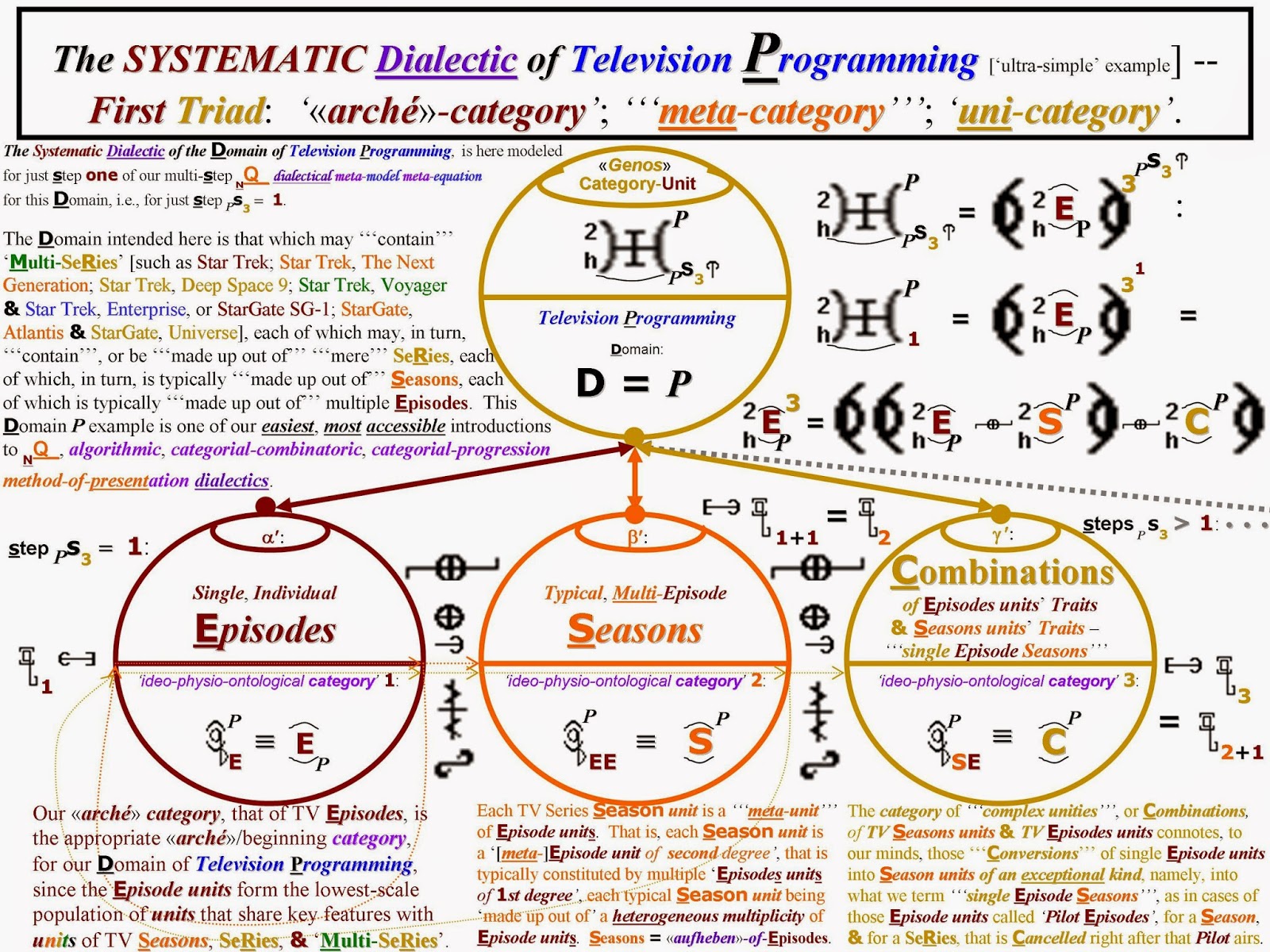 Were we to find no instances of such units, then “category” qSE might be an instance of the generic “empty category”, denoted . -- connoting “full zero”, or “existential zero”, or ‘ontological zero’, or ‘qualitative zero’ -- for this particular domain, and for WQ, and we would “assert” our solution as follows:
qSE  =    .  [---)  Wq0.

But let’s keep our ‘categorial-combinatorially possible’ category qSE around for a while longer, since I feel so sure that the instances of the units implied by the category-description ‘qSE’ have existed, even though I can’t just now cite any --

We already know how to “solve-for” qRR.

Our step s = 3 equation-model, as we have solved it so far, thus now looks like this --

-- since we still have not “solved-for” which actual categories of the ‘TV Series’ domain are described by the algorithmically-generated symbols qRE, qRS, and qRSE, if any.

But we already know how to characterize the possible categories that these three category-symbols “call for”, viz.:

¿Do any such categories actually exist today, or in the past, in the domain of contemporary TV Series?

·         ¿Have there been any planned TV SeRies, intended to run for multiple Episodes, but that terminated after just one Episode?

·         ¿Have there been any planned TV SeRies, intended to run for multiple Seasons, but that terminated after just one Season?

·         ¿Have there been any TV SeRies, run for one or more Seasons, with at least one single-Episode Season?

Probably there have been -- at least for the first two category-descriptions listed above.  I don’t know for sure.  Any readers who do know, please write in.

Were we to find no actual instances of such units, then the “categories” qRE, qRS, and qRSE, and might all be instances of the generic “empty category”, . ˜, and we might “assert” our solution as follows:

But let’s keep all of our ‘categorial-combinatorially possible’ category-descriptions around for a while longer, since I think most or all of them probably already have actual instances --

Stage 4.  A step s = 4 self-iteration would end with an ‘‘‘algebraic’’’ category-unknown described by the category-description symbol qMM [---)  q16.

Because I believe that no ‘Multi-Multi-Series’ -- no TV Series made up out of a ‘[Meta-]Series’ of ‘Multi-Series’ -- has ever yet existed, I’m declaring step s = 4 to be null, and stopping the 'self-iteration', and the narration, of this model here, even though some of the “cross product” category-descriptions, “crossing” category M with each of the seven predecessor categories of step s = 3, might turn out to have actualized meaning / not to have the value of the WQ version of ‘full zero’,..


The meaning mnemonically compressed into this four symbolic-element expression, E23, can be depicted as follows --


-- plus, our specification of this 'dialectical-mathematical meta-model', and our interpretation / '''solution''' of the algorithmically / algebraically generated terms of its 'dialectical meta-equation', can be described as follows -- 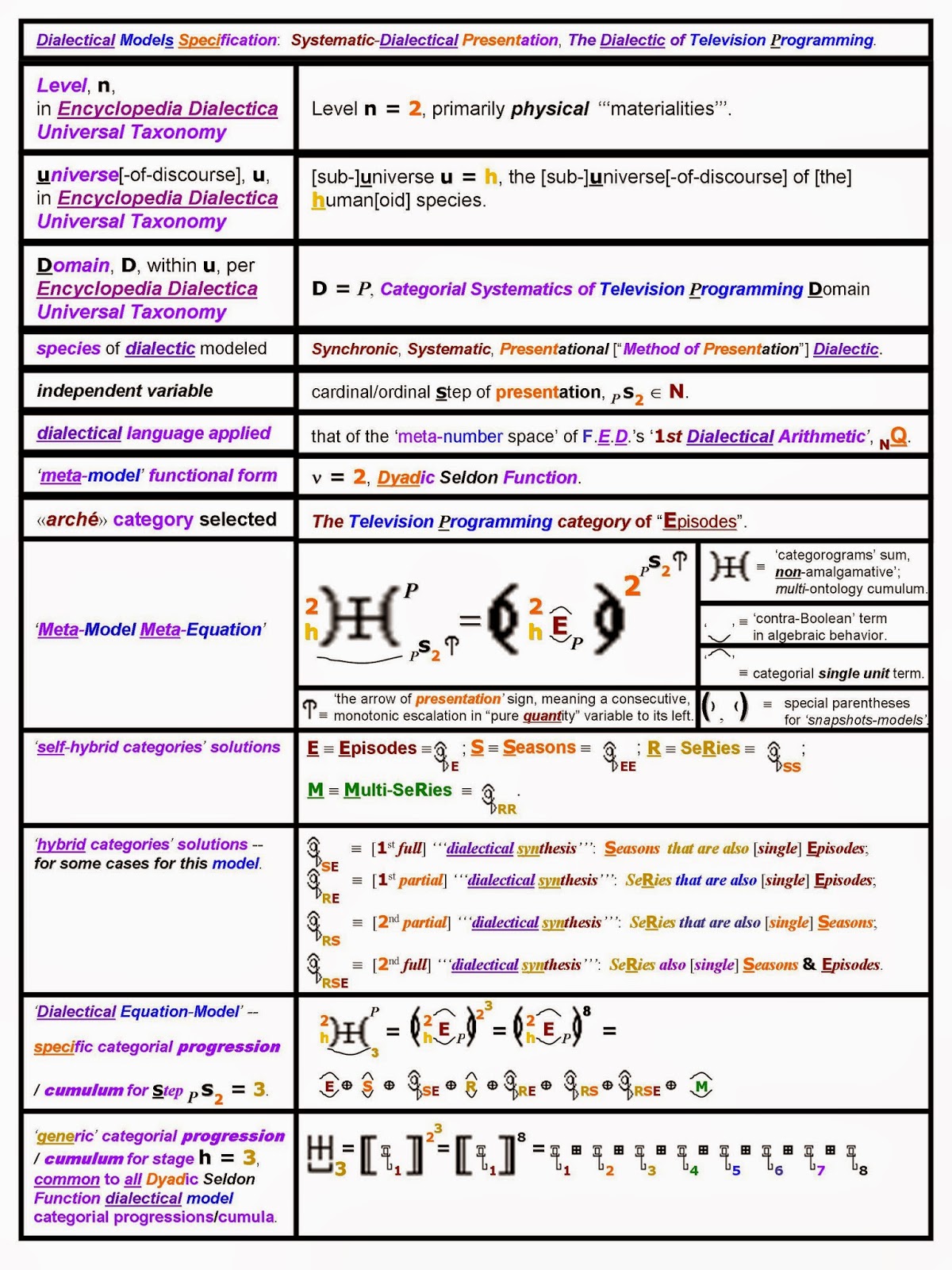 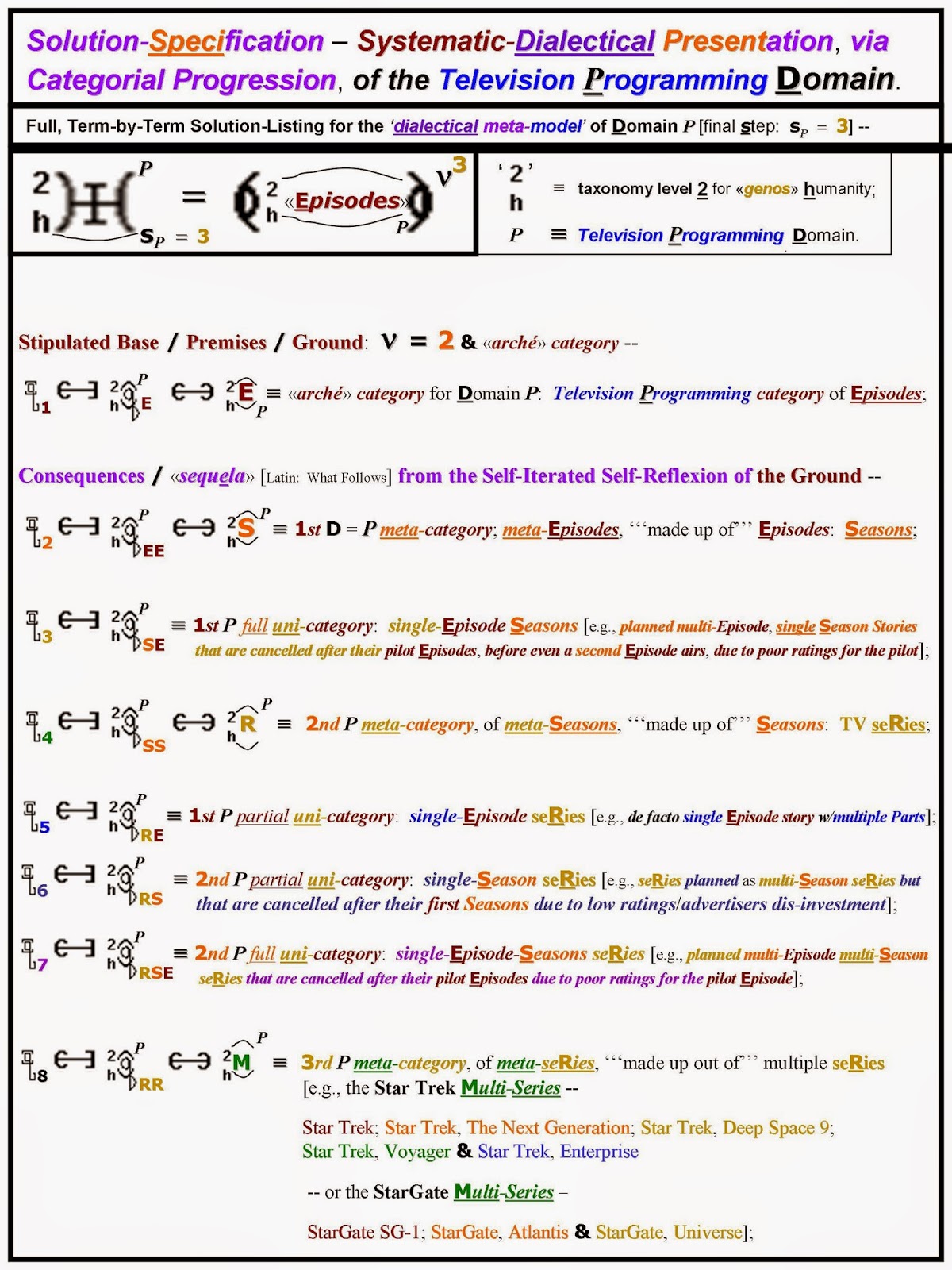