GLOBAL STRATEGIC HYPOTHESES:  The [so-called] “Scientific” American magazine, having long ago prostituted itself to the ‘Rocke-Nazi Plutocracy’, and to their strategy of ‘‘‘Eugenocidal’’’, ‘“people are pollution’’’ “population reduction”, and of reversal of the historic growth of the social forces of production in general, including protracted reduction in the standards of living of the U. S. working class in particular, as well as of the world working class entire -- of course, all on pious [PSEUDO-]“ecological” grounds -- recently found itself having to make a most uncomfortable admission, and to try to defuse that admission in a most clumsy and contrived fashion.

In a 08 June 2015 on-line posting, “Scientific” “American” wrote as follows -- “statistics in recent years have revealed a worrisome trend:  the rate of maternal mortality in the U.S. has more than doubled in the past few decades. Whereas 7.2 women died per 100,000 births in 1987, that number swelled to 17.8 deaths per 100,000 live births in 2009 and 2011. The uptick occurred even as maternal mortality dropped in less-developed settings around the world. Now women giving birth in the U.S. are at a higher risk of dying than those giving birth in China or Saudi Arabia. The reason for this disturbing trend has eluded researchers, however.”
[http://links.email.scientificamerican.com/ctt?kn=52&ms=NDg4ODI5OTQS1&r=NTY3NzEwNTE3OAS2&b=0&j=NzAxOTY5Nzk0S0&mt=1&rt=0].

The Huffington Post, in a 19 June 2015 on-line posting, offered a rather more honest assessment of this disgusting and inexcusable catastrophe --


“American maternal mortality rates rose over a 20-year period at a rate that places the U.S. in the company of war-torn countries like Afghanistan and impoverished nations like Chad and Swaziland, according to a new report.”


“The findings were recently published in the Lancet by the Institute for Health Metrics and Evaluation, a global health research center at the University of Washington. They comprise over 20 years of maternal health data from around the globe. The report shows that there are 18.5 maternal deaths per 100,000 live births in the U.S., up from 12.4 deaths per 100,000 births in 1990.” 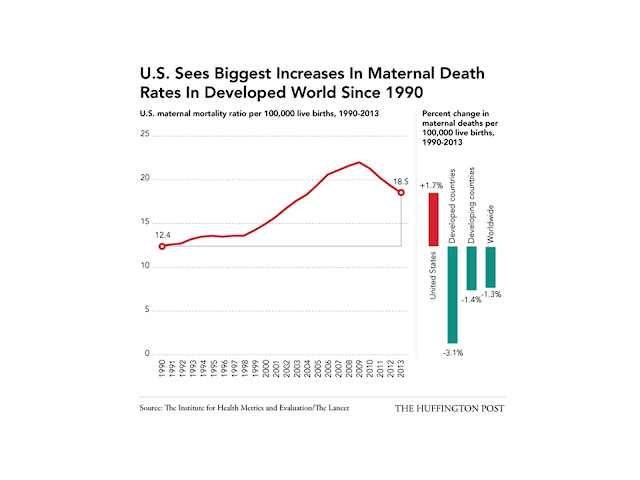 “Dr. Nicholas Kassebaum, the lead author of the study and a pediatric anesthesiologist at Seattle Children's Hospital, said the findings show that America has a long way to go when it comes to identifying and caring for women at risk of pregnancy-related complications.”

“ "In the global context, yes -- the United States has a low maternal mortality rate," Kassebaum told The Huffington Post. "But we rank 60th in the world, and below virtually every other developed nation. We're close to triple the rate of the U.K. and eight times that of Iceland, the world's leader." ”

“What is it about the U.S. that makes pregnancy more deadly?”

“It all comes down to health care access ... the pitfalls and perils of trying to gain access to affordable care in the U.S. compared to other nations.”[http://www.huffingtonpost.com/2014/05/19/us-maternal-mortality-rate_n_5340648.html]

OUR HYPOTHESIS.  Ironically, and in a way in which the Huffington Post writer no doubt never intended, in her comparison of the U. S. maternal death rate to those of “war torn countries”, the U. S. too is a ‘“war torn country”’.

But the ‘‘‘war’’’ that is tearing the U.S. apart is a somewhat -- to some eyes -- invisible war, a stealth war of ‘humanocide’, against the U. S. working class, and, indeed, against “the 99%” of the people of the United States entire, by the ‘Rocke-Nazi’ ‘‘‘invisible dictatorship’’’.

The rising U. S. maternal death rates, we hypothesize, are just one more outcome of that ‘stealth humanocide’.

The ‘Rocke-Nazis’, as they converge toward their planned global, ‘humanocidal’ dictatorship, seem to fear the people of the United States more than any other people.

They seem to be quite self-assured that their state-capitalist ‘partner-dictatorships’, and their state-capitalist ‘servant-dictatorships’, that impose low-wage near-slavery upon their local working classes, elsewhere in the world -- especially in state-capitalist China, and even in their newest ‘partner-dictatorship’:  state-capitalist Cuba! -- can keep their people down, quite reliably, as well as that the burgeoning EU dictatorship, which is, e.g., murdering Greece, the original home of democracy, and in which unconstitutional police-state surveillance legislation, legalizing universal human rights violating practices that rival those of the U. S. NSA, are passing apace, can, using Greece as a model, grind down the rest of the European peoples into servile submission, and into even-further-accelerated “population reduction”. [For more about the global demographic decline that the ‘stealth humanocide’ program of the ‘Rocke-Nazis’ has already achieved, see Jonathan V. Last, What To Expect When No One’s Expecting, Encounter Books, 2013, which is one of the few recent books to analyze this demographic debacle, though it is also, unfortunately, marred by various right-wind delusions].

However, when it comes to the people of the U.S. -- who seem, to superficial observation, to be perhaps the most deluded and “dumbed-down” of all among the global “sheeple” -- the ‘Rocke-Nazis’ have embarked upon the most comprehensive and coordinated multi-vectored ‘stealth humanocide’ attack in their whole horrific history.

By ‘de-industrializing’ the U.S., hemorrhaging U.S. manufacturing jobs to their state-capitalist, low-wage,  near-slavery ‘servant-dictatorships’ abroad, thereby de-unionizing, ‘unemploying’, and impoverishing the U. S. working class so that more and more U. S. workers cannot afford nutritious real foods, healthy residential environments, or basic medical care; by denying the universal health care access that is standard in the rest of the “First World”; by formulating and promoting deadly-bacteria-infested, obesity-inducing, diabetes-inducing, heart-disease-inducing, cancer-inducing, and dementia-inducing ‘pseudo-foods’ and dietary policies; by engineering and mass-prescribing deadly designer-side-effects-inducing ‘pseudo-medicines’, and by “treating” the resulting, engineered-in ‘side-effects cascades’ with ever more prescriptions of further designer-side-effects-inducing ‘pseudo-medicines’, and by further inducing exponentially-rising autism and dementia epidemics [with autism afflicting 1 in 110 U. S. children as of 2009; see graph below] in part, via adulterated vaccines, laced with squalene, to “over-rev” the recipients’ immune systems, inducing auto-immune diseases, and with thiomersal, to impose Mercury-poisoning on those recipients, and with cancer-causing formaldehyde, and with viruses, including those causing the paralyzing Guillain-Barre' syndrome, the ‘Rocke-Nazis’ have mounted a withering assault on the cognitive powers, the powers to resist the rising ‘Rocke-Nazi’ dictatorship, and the very survival, of the American people -- 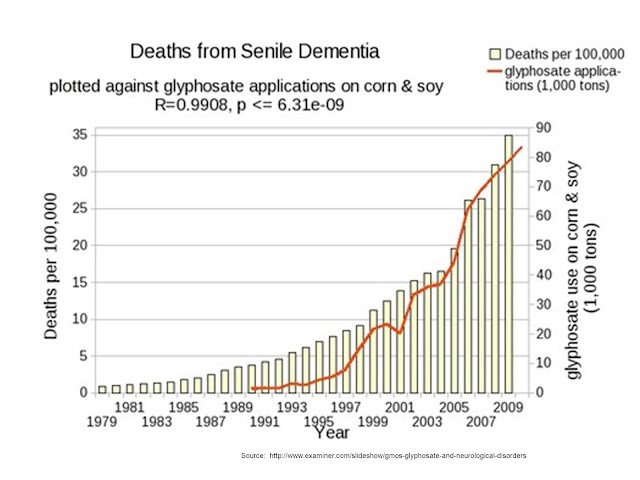 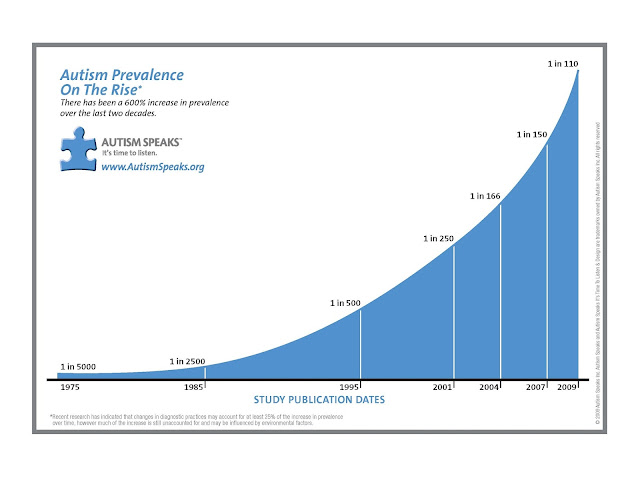 That the ‘Rocke-Nazis’ still feel they still must conduct these mass murders in ‘‘‘stealth’’’ mode, means that humanity still has a fighting chance to rid itself of the ‘Rocke-Nazi Pest[ilence]’ -- if enough of us wake up, and take pro-humanity ACTION, in time! 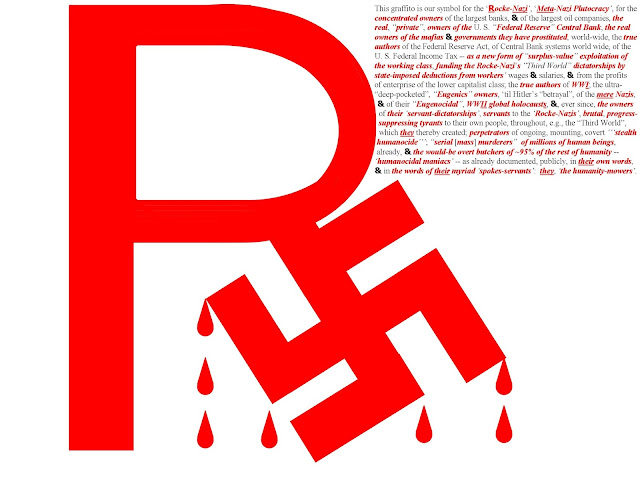