Part 03: Seldon Presents Series -- A Dialectical Theory of ALMOST Everything.

Part 03:  Seldon Presents Series -- A Dialectical Theory of ALMOST Everything.

The third such release in this new series is entered below [Some E.D. standard edits have been applied, in the version presented below, to the direct transcript of our co-founder’s discourse].

“...Our original ‘dialectic of Nature meta-equation’ -- 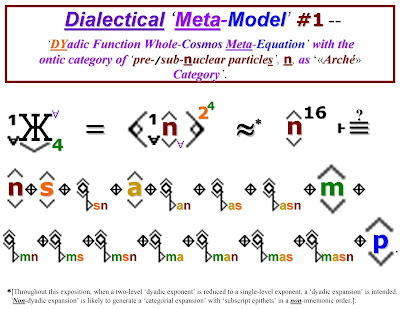 -- as an ontological-categorial ‘meta-model’ of the known history of Nature to-date, fell short of fully qualifying as an ontologically ‘‘‘Everything’’’-embodying ‘meta-model’, not only, as is well known among us, due to its non-capture of the “recombination” of nuclei and electrons, but also in that it --

1.  Abstracts from detail, explicitly expressing only the highest level ontological categories [e.g., those of Taxonomy Levels 0 and 1 per the Encyclopedia Dialectica Universal Taxonomy];

2.  Presents only an abstract model of TIME, via a discretized epoch-variable, as denoted by "t2. [Even if actual time is not “Real time”’, “t”, i.e., is not “continuous”, we experience real time as more ‘continual’ than something that moves in discrete epochal-unit jumps];

3.  Completely omits SPACE/“space-time”, explicitly addressing only our various ontological
sub-categorizations of modern sciences’ single, abstract category for all “mass-energy” ‘‘‘content’’’, as that which is ‘‘‘contained’’’ within space[-time].”

4.  Completely omits “dark energy” and “dark matter”, which, while not truly known as yet to modern science -- which, so far, are mostly UNknown  to modern science -- are known enough to warrant at least some speculative hypothesizing as to what a ‘Whole-Cosmos-History’ meta-model that included them might look like.”

Thus, in all of these many ways, ‘Meta-Model’ #1 exhibits ‘homeomorphic defect’ of ‘Type a.’. 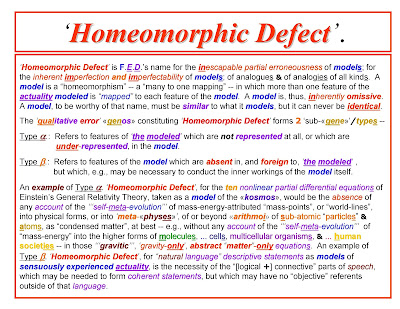 “The homeomorphic defect of that original ‘meta-model’ with respect to “recombination” can be redressed by a revised ‘meta-model’, ‘Meta-Model’ #2 in this recounting, a ‘meta-model’ which “lumps” “non-composite” and “composite” bosons and fermions into a single revised «arché» category, that of:  ‘pre-atomic “particles” as «arché»-«monads»’ -- 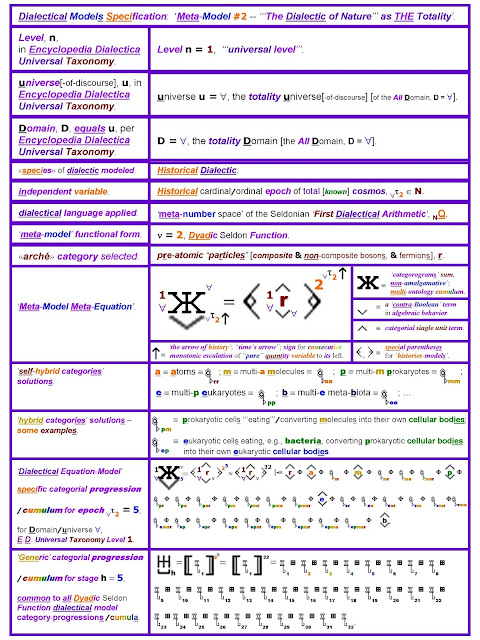 -- but this redress obviously comes at the cost of removing the first known «aufheben» ‘meta-«monad»-ization’ -- namely, that of the «aufheben» ‘meta-«arché»-ization’ from “non-composite” to “composite” bosons and fermions -- to off of the main-line of the Taxonomy Level 1 ‘dialectic of Nature’, and, thus, at the cost of relegating that «aufheben» process to a ‘sub-dialectic’, located one further Taxonomy Level down, inside that revised «arché» category, i.e., to a ‘sub-dialectic’ among its first three sub-categories.

“The first term, above, at left, in this highly speculative Whole-Cosmos’ meta-model, namely x, represents our new, hypothetical «arché» ontological category for our cosmos.  It stands for our hypothesis as to the nature of “dark energy”.  Per that hypothesis, “dark energy” may turn out to be characterizable, not only as the “first born” of our cosmos [“first born” within the limits of a future-present knowledge], but also as “pure” TIME, in the form of the accelerated self-expansion of [initially “empty”] SPACE.”

“Its new ‘contra-«arché»’, and second, ‘cosmo-ontological’ category, denoted by c, represents “dark matter”.  “Dark matter” may turn out to be characterizable as reaction against and resistance to the self-expansion /self-inflation of space that x expresses; as the tendency to contract space, or at least to slow down space’s self-expansion, an ontology that is engendered by, and ‘meta-genealogically’ born out of, “dark energy” itself.”

‘Meta-Model’ #3 is [partially] summarized in the image below. 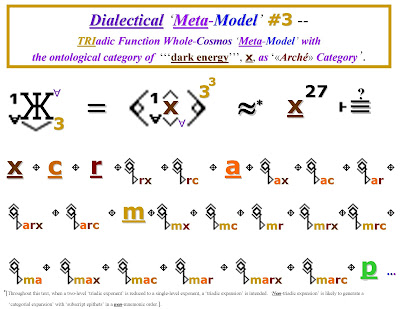 “However, this alternative ‘meta-model’ must remain highly speculative for as long as the more detailed natures of “dark energy” and “dark matter” continue to elude science.”