I am taking this opportunity to share, with you, an excerpt from the E.D. Archive’s transcript of a just-released autobiographical exchange with our co-founder, Karl Seldon, excerpted from a recent Foundation ‘internal multilogue’, on the ‘psychohistorical dialectic’ of the formation [«bildung»] of human-social self-identities, in which I was privileged to participate.

Please Note:  Karl Seldon’s response to his interlocutor, in this exchange-excerpt, involved the review of versions of the [presentationally] first ‘meta-equation’ of his ‘meta-system’ of ‘psychohistorical dialectical meta-equations’, and of his ‘dialectical “theory of everything” meta-equation’, that differ, in some respects, from the versions usually presented in this blog heretofore.

The excerpt, as posted below, has been redacted, for public release, by Encyclopedia Dialectica editors who are members of the F.E.D. ‘Special Council for the Encyclopedia’.

I have also posted below, underneath this excerpt, a JPEG image that tells some of the "story behind the story" of this excerpt.

“...[Response:]  I awakened while I slept, while I dreamed.  In the moment that I saw that ‘scripture/equation’ -- the ‘‘‘libretto’’’ for ‘‘‘The Song Celestial’’’; the ‘‘‘score’’’ for ‘‘‘The Music of the Ainur’’’; the ideographically-written story of our «kosmos» -- carved into that cone of stone, my new identity congealed in response, like a flash crystallization. ... In a flash, my potential self-identity was no longer just a hyper-localized -- atomistic -- personal self-identity.  Nor was it any longer a family-only self-identity.  Neither was it any longer a merely ethnic, or sectarian-religious, or class, or national[ist] self-identity.  It was now an all-humanity self-identity, but not only that.  The presentors of this everything-equation/mandalla were presented, in my dream, as alien humanoids.  So my self-identity expanded to an ‘all-humanoidity’ self-identity at least.  But, in the final analysis, given the ‘equation of everything’ content of that scriptural inscription, the flash-result was a ‘cosmological self-identity’ -- an identification of self with the «kosmos» as a whole. ... Still, this was only my newly-irrupted potential self-identity.  Its ‘kineticization’ has required all of the years hence for its outworking toward full actualization, and that outworking continues still, to this very moment.”

“In that moment of sleeping, dreaming self-transformation, discovering that equation in our waking world became my life-quest.”

“I could not help but to pursue, ever after, that dream-vision, of that ‘everything-equation’, towards its real world actualization, despite how hopeless the chances for success of my quest appeared to me, both then, and for many long years thereafter.”

“Yes, I believe that there were.”

“Leading up to the time when this dream irrupted, I had been catapulted into an intellectual culture rich beyond my years, and rich beyond anything precedented in my life up until that extraordinary period.”

“My father had been, for decades, very active in the youth organization of the time and place where I was raised.  Consequently, he was apprised, early-on, when a trio of chemistry Ph.D. students, former members of that youth organization themselves, who felt that they had benefitted greatly from their membership therein, growing up, and who were “fraternity brothers” at a very prominent local University, decided to “give back”, by organizing a first-year-college-level course in chemistry over a long series of weekends, pursuant to the chemistry medal that was offered to matriculating members of that youth organization, in return for a certain program of learning-effort in the field of chemistry.  But this course, which included the use of the first-years’ chemistry labs, was designed to exceed those chemistry medal requirements by far, and to include an after-course introduction to calculus, to quantum mechanics, to non-abelian [non-commutative] algebras, etc., for those who passed the course exams with “flying colors”.”

“At this time, I was in the local equivalent of ~ the sixth grade.  I had been deeply interested in science and technology -- in virtually every field -- from an early age, and my father, a man of similar interests, but without a full college education -- had helped me to build, in our family garage, Tesla coils, Ouida coils, cloud chambers, and more, and had taken me to exhibitions of what passed for “robots” at the time, etc.”

So he immediately enrolled us both in the upcoming chemistry course.”

“I did well in that course, and the resulting contact with the Ph.D. students, as mentors, that it involved, and the tangential immersion in the general intellectual culture of that University, expanded my horizons, over night, exponentially.”

“As part of that expansion of my intellectual horizons, I found myself asking many questions of those mentors, including some that they said science could not answer -- questions that they characterized as belonging to philosophy, or even to religion.”

“But I positively burned with those questions, and began to seek answers on my own, keeping my [controversial] quest to myself.”

“So that was the context out of which my dream-vision irrupted.  I think that my sub-conscious mind, revved into hyper-stimulation by that -- for me, unprecedented -- hyper-enriched intellectual context, synthesized, sub-consciously, virtually the whole of my experience of life, up until then, in the civilization and historical period into which I had been born, and “distilled” out of it all, a ‘life-script’ for me, adapted for that real world, which it delivered to me in my sleep, as that “unusually vivid”, unforgettable dream.  That dream included a vision of a future civilization -- indeed, one disguised as an alien civilization -- which had achieved the core of what our civilization then lacked, and longed-for, and still lacks and longs-for today; a new kind of new civilization which it was my implied life-mission to help to bring to birth.”

“What I saw, in that dream-imaged conical amphitheater, in that place of fellowship in -- and of -- awe and celebration, and carved into the stone of that central, upward-pointing conical altar, in that ‘scriptural equation’, was my dream-imagined presence of that which was so drastically absent in my waking life, in the strife-torn civilization within which I was then growing up, on the very brink of my adolescence.”

“What was so drastically absent in the life of my waking world was an ‘integrated-ness’, a unification, a dialectical synthesis, of the three major impulses of human cognitive [and affective] life that had been constructed by our «species», as a core legacy of human history, up until then, all ultimately born from out of the Mythopoeic cognitive/affective «arché» with which we began -- and which remain still, up until NOW:  (1) codified, dogmatic/mystical Religion, (2) doctrinaire Philosophy, and the reliable, empirical, experimental, practical-experiential truths of (3) true mathematico-scientific Knowledge, once the Ideologies tending to infest that science are stripped away by immanent critique [M.D.:  and then his fingers flashed across his ‘comp-pad’ keys, and the following symbols, written in flames of light, cascaded across our surround-screen, summarizing humanity’s progression, from Ideology toward scientific, other-Knowledge, and, tendentially already, toward the beyond of that; toward collective self-Knowledge [Greek-letter-Psy] -- 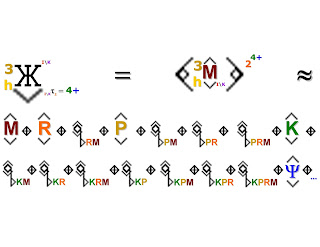 -- showing all sixteen terms for the Dyadic Seldon Function version, for this meta-model’s epoch 4.].”

“Yet it has not been my sudden finding, on April 7th, 1996, after nearly 40 years of only slowly-fruitful searching, of the NQ arithmetic for dialectics, and of its ‘contra-Boolean’ algebraic dialectical logic, and, with them, of the first ideographical language in which a simplest version of the altar-imaged ‘equation for everything’ could be written down [M.D.:  again, his fingers flew across the keys, as symbols flashed across our big screen -- 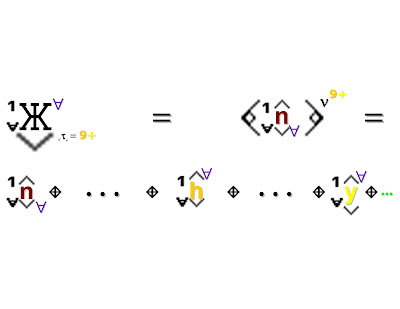 -- showing just three terms for a general, ‘[Greek-letter-]nu-adic’ Seldon Function version, for this meta-model’s epoch 9, plus . . .], that has turned out to have been the fullest and truest fulfillment of that dream-vision-born life-quest.”

“It has been my finding of the fellowship -- a fellowship, yes, of awe, and of celebration, but also of incipient global reconstruction/Global Renaissance seed-sowing -- of this Foundation, that has proven to be that fullest and truest fulfillment.” 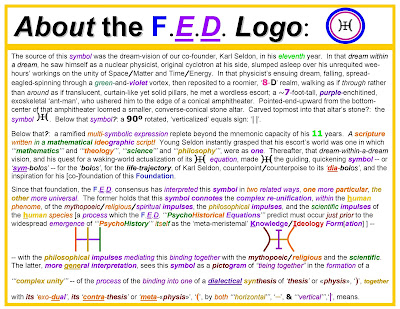