‘Some Ancient «Arithmoi» Theories versus

It is my pleasure, and my honor, as an elected member of the Foundation Encyclopedia Dialectica [F.E.D.] General Council, and as a voting member of F.E.D., to share, with you, from time to time, as they are approved for public release by the F.E.D. General Council, key excerpts from the internal writings, and from the internal sayings, of our co-founder, Karl Seldon.

The sixth release in this new such series is posted below [Some E.D. standard edits have been applied, in the version presented below, by the editors of the F.E.D. Special Council for the Encyclopedia, to the direct transcript of our co-founder’s discourse].

In this 6th installment, Seldon describes a crucial difference between anciently-prevalent “«arithmoi» [‘‘‘number’’’] of «monads»” theories, e.g., those of Euclid and Aristotle, and the E.D. ‘‘‘«arithmoi» of «monads»’’’ theory.

As background, a definitional ‘text image’ is posted below for your reference.

“The category of «arithmoi» [‘‘‘numbers of units’’’] and the category of «monads» [‘‘‘units’’’ that, assembled together, form ‘‘‘numbers’’’] are not absolutely distinct – not  “either/or” distinct.  They do not truly form a “radical diremption”, an unbridgeable dualism, unlike they did in the minds of, e.g., Euclid and Aristotle, during the ancient psychohistorical-dialectical epoch of human ideology\knowledge.”

“That ancient conception has been described as follows:

“EUCLID defines in the Elements, VII, 2, a number as “the multitude made up of units”, having previously (Elements, VII, 1) said that a unit is “that by virtue of which each of existing things is called one.”  As a unit is not composed of units, neither EUCLID nor ARISTOTLE regard a unit as a number, but rather as “the basis of counting”, or as “the origin [i.e., as the «arché»] of number”.”

“On the contrary, as we see it, for example, an «arithmos» of «monads» can itself become, or be usefully treated as, a single «monad».”

“Mentally, in human minds, a – plural -- «arithmos», itself ‘“containing’’’ many «monads», all of a given kind, can itself become a singular, a single unit in its own right, by being represented, in human minds, as a ‘kind category’, i.e., as an ontological category.”

“Physically – ‘Exo-Physically’ – in humans’ perceptions and conceptions of what goes on outside of human minds, a ‘kind «arithmos»’, an ‘ontological «arithmos»’, can give birth to a new, higher [more inclusive] «arithmos» of «monads» via that universal dialectical or «aufheben» ‘‘‘determinate negation/conservation/elevation process’’’ that we call ‘self-meta-«monad»-ization’.  In that process, multiple ‘sub-«arithmoi»’, each consisting of multiple «monads» of a given kind «arithmos», coalesce into higher ‘neo-«monads»’, which then constitute a ‘neo-«arithmos»’, of a new kind:  new ontology.”

“For example, a primordial, ‘sub-galactic’, ‘atomic cloud’ can become – can turn itself into – in interaction with its environment or ‘externity’ -- a proto-planetary [atomic-and-]“molecular cloud”, in which some of the atoms available, within that cloud of atoms, bond together -- ‘«aufheben»-combine’ -- forming new, higher kinds of units, molecule units, each typical molecule unit being made up out of a heterogeneous multiplicity of atom units, so that those atom units become sub1-units of/to that one molecule unit.”

For more information regarding these Seldonian insights, please see -- 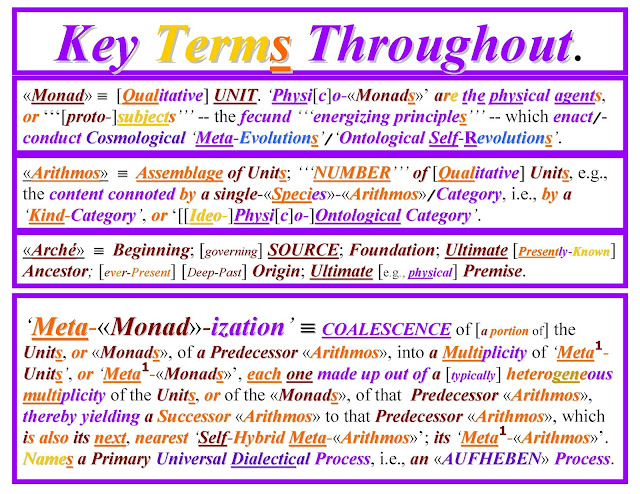