A Dialectical Model of the Theories-History of Modern Physics

An F.E.D. [[Cognitive-]Psycho]Historical-Dialectical ' Meta-Model' of the '''Meta-Evolution''' of Modern Physics --

NQ Variation on a Theme of Sander Bais's The Equations: Icons of Knowledge, esp. per its pp. 10 & 94.

On page 10 of that book, Bais summarizes his book's content by means of a "Map of contents" diagram, and on page 94, near its end, he offers a diagram similar to the following, which he discusses from p. 93 to p. 95, and which presents a '''grand overview picture''' of modern physics as a whole, to-date, in the form of a "magical cube positioned in the 'space of theories' ", noting that this "magical cube" is "a different -- three-dimensional -- representation of the 'map of contents' presented at the beginning of the book. The great turning points in physics are situated at the corners of this cube." [p. 93]: 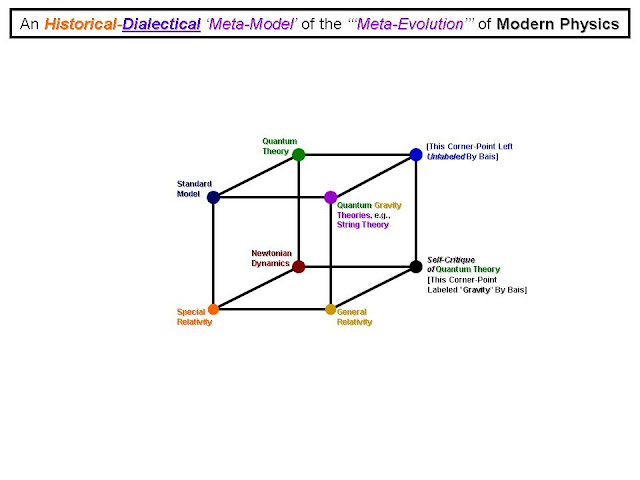 This "magical cube" represents, in F.E.D.'s terms, a "meta-model" of the historical "meta-evolution" of the fundamental theories of modern physics, in the form of a theories-progression of physical theories, i.e., of theoretical systems of physics, starting with "Newtonian Dynamics" as <<arche'>> theoretical system.

-- can be used to render a more insightful version of this "magical cube" "meta-model" mathematically, in a way which includes a prediction of the next major theoretical development in modern physics, a prediction which will be quite shocking to many followers of modern physics.


NQ_Cognitive PsychoHistorical-Dialectical Mathematical Meta-Model of the Meta-Evolution of Modern Physics.

In concurrence with Bais's model, we will take, for our dialectical model, Newton's theory, as systematized in Newton's <<Philosophiæ Naturalis Principia Mathematica>>, as the <<arche'>>, or first emergence, of modern physics theory.

Bais splits Newton's theory across two nodes of his "magical square", one marked "Newtonian Mechanics", and the other marked "Gravity".

Indeed, vacating that node of Newtonian, <<arche'>> content makes it available to represent the most advanced "meta-meristem" of physics "meta-evolution" in our "meta-model": that of the predicted next "meta-evolutionary jump" in physics theories.

Thus, in our theory, Newton's total <<Principia>> theory is assigned to the generic NQ "meta-number" q/1, which, as interpreted to represent '''Newtonian Dynamics''' as a whole, is denoted by q/N, or N --


Therefore, using the "Dyadic Seldon Function", our model can be rendered "equationally" as follows --

-- and the various stages, t...=...0 through t...=...3, of our [[cognitive-]psycho]historical unfolding of the progression of modern physics theories, unfolds, per this "meta-model", as set forth in the next section below.

Note that, as modern physics theories, the critique and the progression of these theories is driven, not, as with "pure-mathematical", axiomatic theories, by the immanent, internal logico-conceptual deficiencies of each theory in the progression, such as the "Goedel formulae", each representing an "unsolvable equation" of a given axiomatic system of arithmetic.

Only with the experience of such a theory/data discrepancy does the re-consideration of the internal conceptual logic of the thus newly experience-discrepant theory -- the review that may set the stage for a leap into a successor physics theory-system -- officially begin.

Stages in the Progress of the Theories of Modern Physics Reconstructed/Predicted by Our Meta-Model.


delta_N........=........q/NN........=........S -- Here's how Bais narrates this transition -- that of the emergence of the theory-category of the self-critique of Newtonian Dynamics -- on pp. 93-94:   "At the lower back edge, labeled by Newton's constant, we find the Newtonian physics (mechanical and gravitational theory) we have been harassed with in high school. The theory of Special Relativity connected to the universality of the velocity of light opened up a new dimension, as symbolized by the bottom plane coming out of the page" [emphasis added by M.D.].

Here too the dialectical meta-model should go beyond Bais's model.

The self-critique of Newtonian Dynamics began, not with Einstein's Special Relativity Theory, but with Maxwell's Electromagnetic Field Theory.

Maxwell's theory brought into modern, mathematico-science, in universal field theory form, the forces of electricity and magnetism, which it also unified, and, explained, via that unification, the origin of light and of other parts of the electromagnetic waves' spectrum, and determined the velocity of light.

Newton had mentioned these forces, in his <<Principia>>, as among the next forces to be tackled using the new method that he had exemplified in the <<Principia>>, for contact mechanical forces, and for the universal gravitic force, but Newton did not accomplish that task.

Einstein's work took Maxwell's work as one of its primary inspirations, and Special Relativity Theory can be grasped as a direct extension of Maxwell's work -- which had already derived the speed of light via the Maxwell equations for the universal electromagnetic field -- to align Maxwell's theory with the later discoveries of the constancy of light speed, and of light-speed's role as the <<de facto>> upper bound of the "speed limit" for "ordinary matter" [tardyonic, "epsilonic meta-phase" matter, per F.E.D.].


q/SN........=........G -- Here's how Bais narrates the emergence of General Relativity Theory, on p. 94:   "...the Special Theory [of Relativity -- M.D.] was still in conflict with the Newtonian theory of gravity, a conflict that was eventually resolved by the General Theory of Relativity, where gravity was identified with the curvature of space-time."

delta_S........=........q/SS........=........Q -- Here's how Bais narrates the emergence of Quantum Theory, again on p. 94:   "Subsequently, we went through the quantum revolution linked to Planck's constant, which adds yet another dimension to our conceptual framework, perpendicular to the space-time-gravity plane." [emphasis added by M.D.].

Thus, we identify the term q/SS, connoting the self-critique of Special Relativity Theory, as the [revised] theory of "The Electrodynamics of Micro-Physical Moving Bodies", with Q, connoting Quantum theory.


q/QN -- Here's how Bais narrates the category of what we term Macro-Physical Non-Relativistic Quantum Theory -- the "reconciliation", "dialectical synthesis", "complex unity", or "hybridization", of Quantum Theory and Newtonian Dynamics Theory, or the "real subsumption" of N by Q -- a possible physical theory per his model, which he seems to hold would be useless, would not be worth developing, and which, he also seems to hold, has not ever been actualized, also on p. 94: "The upper right hand corner in the back would refer to a non-relativistic treatment of the gravitational force. This point lies not in the physically interesting domain of parameter space. For example it would represent the quantum mechanical treatment of the moon-earth or the planetary system. The parameters would be such that the result would not differ by any ever-observable effect from the classical Newtonian result."

q/QS -- Here's how Bais narrates the theory-category of "The Standard Model [of [micro-physical] "particle" physics]" -- the "reconciliation", "dialectical synthesis", "complex unity", or "hybridization", of Quantum Theory and Special Relativity Theory, or the "real subsumption" of S by Q -- again on p. 94:   "We then had to face the fact that now ordinary quantum theory and special relativity didn't like each other. This conflict was resolved by the development of quantum field theories like quantum chromodynamics and electro-weak theory. So in the front left top corner we basically see the Standard Model."

q/QG -- Here's how Bais narrates the theory-category of a "Quantum Gravity" Theory -- the "reconciliation", "dialectical synthesis", "complex unity", or "hybridization", of Quantum Theory and General Relativity Theory, or the "real subsumption" of G by Q -- on pp. 94-95: "...the conflict between our quantum theories of matter and Einstein's geometric theory of space-time and gravity on the other. This conflict is basically in the domain of nature parameterized by the Planck scales, and therefore impossible to probe directly by experiment. One may hope that string theory will ultimately be able to resolve this conflict hiding so deeply under the surface of everyday experience; string theory as a quantum theory of space-time."

F.E.D. interprets this term as predicting the emergence of a nonlinear unitary field theory universal nonlinear equation, whose solutions are not, as with the Schroedinger equation of classical quantum theory, space/time functions of a random variable, but which are, instead, space/time functions of a deterministic, causal variable, but involving "spatio-temporal[-ized] strange attractors", and which will account for the statistical/probability distributions projected onto the data of micro-physical "particle" dynamics as a result of cumulative "causal entanglements".


For more detail on this view, see the following F.E.D. text, an excerpt from their book "Dialectical Ideography", and see especially footnote 7, pp. vii. through x.--


So, in toto, our NQ dialectical "meta-model" of the "meta-evolution" of the theories of modern physics, starting with/from Newtonian theory as <<arche'>>-theory category, is the following --


-- a "meta-model" which can be "pictorialized" as below. 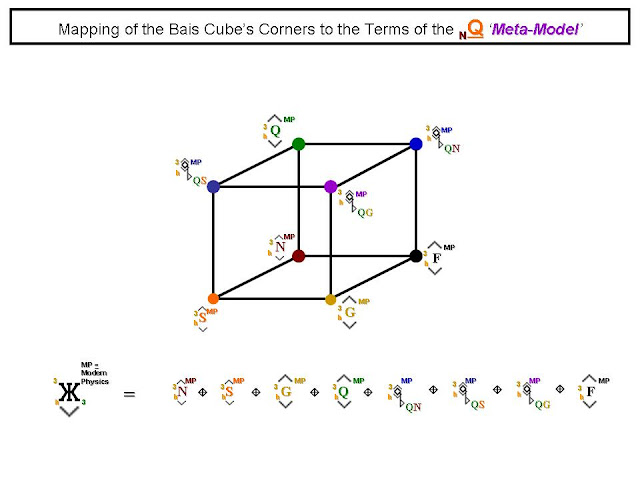 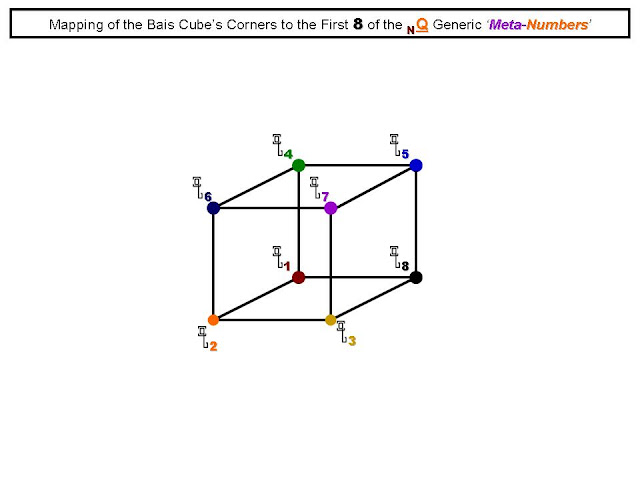