It is but one of four moments, four <<species>>, of "The Dialectic of the Dialectic Itself" -- a phrase which , I expect, makes no sense to those unfamiliar with the historical roots of dialectics in Ancient Greek ideology, and, in particular, in Plato's philosophy, in which "assemblages of ideas [ i.e., of <<eide>>]", that is, "numbers" of ideas -- the dialectical <<arithmoi eide-tikoi >>, divided into <<genos>> ideas, and their attendant <<species>> ideas, formed the core of Plato's "idea-systematics", i.e., of the Platonian Dialectic itself.

Such a stance leads rapidly to a loss of Dialectics as a whole.

However, it is clear to me in reading and re-reading <<Das Kapital>> that Marx employed a [psycho-]historical materialism version of Systematic Dialectics as his main method of presentation in that work.

However, Marx clearly does not hold his Systematics Dialectics in any radical external dualism with Historical Dialectics, or with the other two moments, or <<species>>, of <<genos>> Dialectics in that work.

On the contrary, he 'helicates' rapidly from one moment / <<species>> of Dialectics to the other(s), citing, for example, even pre-capitalist, Ancient Roman history regarding value-form social relations of production that had an "antediluvian" -- pre-capitalist -- history, before being subsumed by the capital-relation during the world-wide development of industrial capitalist societies, e.g., the money-form social relation of production.


The primary focus of Systematic Dialectics is synchronic, not diachronic.

The job of Systematic Dialectics is to present a given [sub-]totality or system of human experience back to its human experiencers, who have typically experienced that totality up until that presentation only in a "chaotic" Marx], fashion, in -- instead -- a comprehensive, comprehended, comprehensible, systematically-ordered, dialectically-theorized fashion.

Systematic Dialectics does this job by "sampling" that totality by a single, synchronic, all-at-the-same-time "slice", or "[cross-]section", through the physical space of that totality, and explaining the self-reproduction of that system/totality within that "slice", delineating the "anatomy" and "physiology" of that self-reproduction process via a categorial progression of ever-more-complex, ever-more-thought-concrete, categories [ <<gene>>-categories, <<species>>-categories, etc.], starting from the simplest, most abstract category that still implicitly captures the totality of that system as the <<arche'>>, or beginning, category in that categorial progression.

For Marx, the <<arche'>> category from which the systematic exposition of the self-reproduction of the capitalist system/totality should be launched is the Commodity-Form-of-Value-in-general, or, more deeply, the "Elementary", "Accidental", or "Isolated" Form of Commodity-Value.

The main time[-interval] from which the synchronic "slice" sample of the system/totality is taken for a Systematic-Dialectical exposition thereof, is usually the "zenith" or "high-point" period of the ascendant phase of that system/totality.

This focus on the zenith can give rise to the illusion that the self-reproduction process presented can and/or will continue indefinitely; that it will not -- dialectically -- turn into a process of self-dis-reproduction, or of "self-dissolution", in the very continuity of its self-re-productive process.

It is my opinion that some of the self-professed advocates and practitioners of "Systematic Dialectics" have fallen into this illusion, contributing to and exacerbated by their concomitant denial of "Historical Dialectics".

Such a fall into undialectical illusion is "limiting and lifeless" in the extreme, as it denies the very dialectical life of the systems/totalities presented, falling from dialectics back into a kind of merely cyclical/circular simple-reproduction-as-stasis, or as "dynamic-equilibrium", pre-dialectical stage of thought, missing the whole "helical", cumulative, progressive dimension of real change, which always involves the revolutionary irruption of new, unprecedented ontology: of new kinds of being/becoming.


Marx's use of dialectics, in <<Das Kapital>>, and elsewhere, beautifully and brilliantly escapes these pitfalls.

Indeed, Marx's recurrently exercises and integrates all four moments of Dialectics throughout his work, including in <<Das Kapital>>.


In the initial, 0th historical "epoch" of Dialectic, the only <<species>> of "Dialectic-in-general" -- of the <<genos>> of Dialectic -- was Systematic Dialectic, as associated especially with the early Plato:

t = 0 implies only Systematic Dialectic is possibly extant during this initial epoch.

This is because, for the early Plato, only the "transcendental" realm of the <<eide>> was really real, because it supposedly was eternal, unchanging, immutable, absolutely statical. Therefore, any "synchronic slice" "cut" through it, any "sample" of the <<arithmoi eide-tikoi>>, taken at any human time, produced identical results.

So, in its beginning, the <<arithmos>> of the category of [Systematic] Dialectics itself could be seen as an assemblage which has [identical] time-slices through the <<arithmoi eidetikoi>> totality as its <<monads>> or units.

Later Systematic Dialectic presents progressions of categories / progressions of <<arithmoi>> that chart the internal self-reproductive dynamics of a single system / sub-totality, in at least partial abstraction from the known existence, or from the dialectical-scientific prediction, of diachronic predecessor and successor systems to that single system / sub-totality.

t = 1 implies Systematic Dialectic + Historical Dialectic are both possibly extant during this epoch.

The primary focus of Historical Dialectic is diachronic, not synchronic.

Within this historical "epoch 1", humanity begins to realize, contra Plato, that human time -- human history -- is not filled simply with an unorderable, hence unknowable, chaotic flux, such that only the transcendental, changeless <<eide>> are knowable.

With the expansion and deepening of human social-reproductive praxis, and the growth of the human-social "self-force" of human-societal self-reproduction, it dawns that this experiential flux is conceptually orderable, is "theorizable", is "science-able" -- is even predictable, however imperfectly -- and that the observed, dialectical "rise and fall" of sub-totalities, of natural [self-]formations, including of human-natural, human-social [self-]formations, across human-historical time, begins to be discernible in the "cumulum" of data / human experience.

"Synchronic slices" taken at different intervals of natural/human time are no longer identical in their content, because they are cross-sections through the empirical world of historical "flux"/progress; no longer "cuts" through the imagined world of the "transcendental" <<eide>>.

Meta-System-atic Dialectic takes "slices" / "snapshots" / "samples" from the "zenith", the "nadir", and from time-intervals in-between them, for each system / sub-totality to be explained / theorized, to form its units, or <<monads>>.

Its categorial progressions are no longer merely progressions of "anatomical" and "physiological" categories native to the internal processes of self-reproductive "metabolism" of a single system/sub-totality.

Its categorial progression is a systems-progression.

By "meta-system" in this context, F.E.D. means "progression of systems, presented in their chronological, historical order of appearance."


Psychohistorical Dialectic involves a turning of the attention of dialectical theory-makers back upon the theory makers themselves; back upon the collective, cognitive, cultural, "human-Phenome-ic", social-"psyche-ic" processes of those theorists, and thus upon the "ideologies", in Marx's sense, that took possession of their processes of thought.

Psychohistorical Dialectic involves asking questions like "why did the same experiential phenomenology/data generate two or more, distinct, "incommensurable" theorizations from different theorists, e.g., alive in two or more distinct epochs of human history?" and "what can account in detail for the differences between/among these distinct theorizations of the same natural/human-social self-formations?"

Psychohistorical Dialectic is an <<aufheben>> determinate self-negation / meta-<<monad>>-ization of Historical Dialectic. The units or <<monads>> of its <<arithmos>> consist of the content of two or more synchronic slices / snapshots / samples of each historical self-formation theorized, as that content is perceived by theorists who produced incommensurable theorizations of that same natural-[ including human-social-]historical self-formation.

An example of Marx's use of the "Psychohistorical" <<species>> of the Dialectic <<genos>> would be Marx's explanation, in the first volume of <<Das Kapital>>, of the genius of Aristotle in Aristotle's analysis of the "Elementary Value-Form" of Commodity-Value, in relation to the Money Form of Value, together with the limitations of Aristotle's analysis, despite his genius, owing to the slavery-based social relations of production dominant in Aristotle's human-social experiential-world.


-- forming a categorial progression which F.E.D. models using its "First Dialectical Arithmetic", that of the NQ "meta-numbers", and using its "Dyadic Seldon Function" as the "Self-Reflexive Function" unifying this "Dialectical Meta-Model". 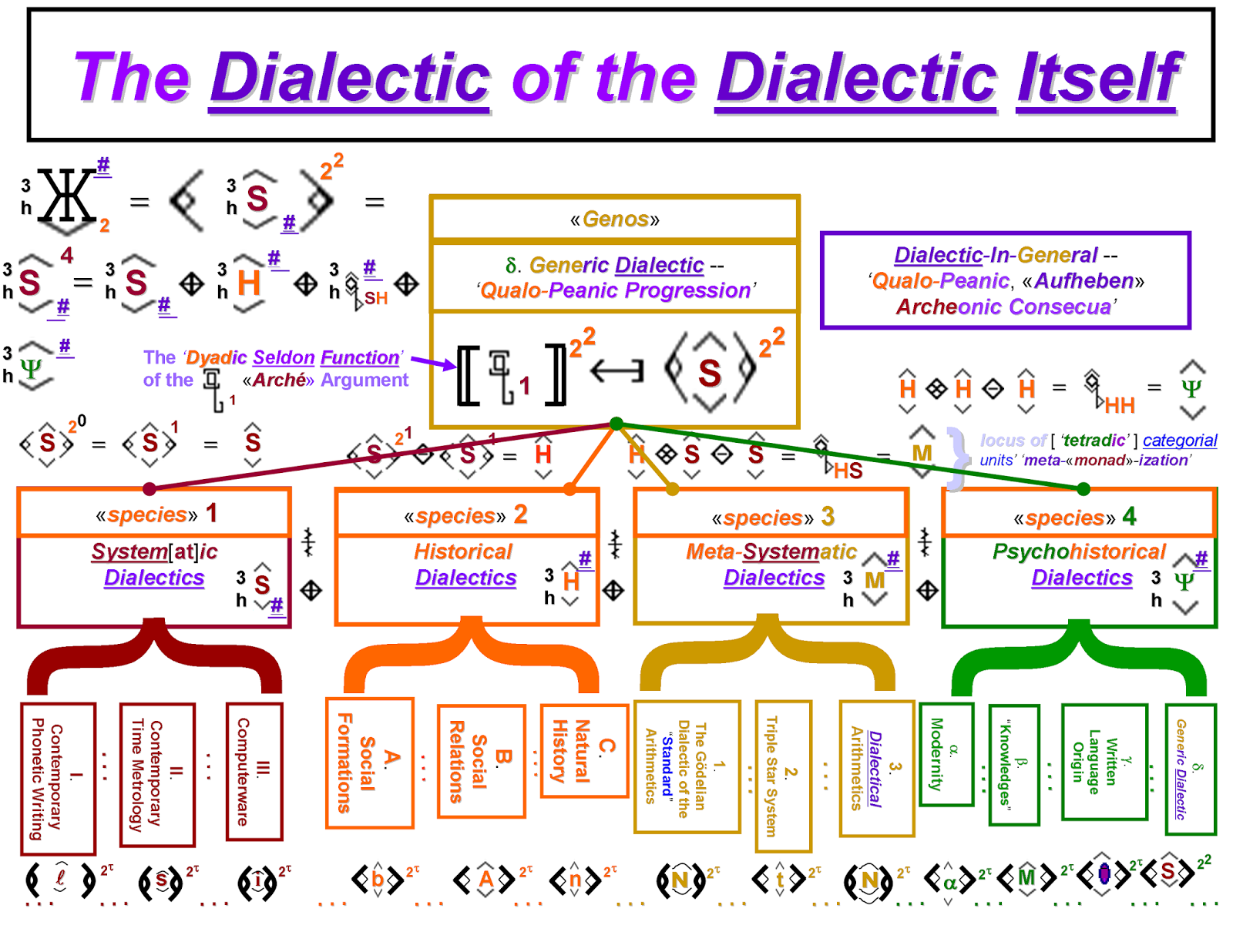 [The above account of "The Dialectic of the Dialectic Itself" is based upon the following F.E.D. source writings --

A Dialectical "Theory of Everything" -- Meta-Genealogies of the Universe and of Its Sub-Universes: A Graphical Manifesto, volume 0, Foundations
[graphics/narrative/formulas modules #s 80, & 207 through 212] ].

So, Systematic Dialectic has its useful place, in Dialectic-in-general, as a method for the ordered, systematic, comprehensive presentation of the self-reproduction processes of systems/sub-totalities, unless it is mistaken for the whole of Dialectic, and, thereby, ceases to be Dialectical, collapsing back into some kind of pre-Dialectical "eternal reproductionism", "simple reproductionism", or "equilibrium-ism".