Below is the text of the fourth of the several standard disclaimers, that we have decided to make explicit, starting in 2016, and that apply to all blog-entries in this blog -- past, present, and future -- as well as to all of the activities of Foundation Encyclopedia Dialectica, and of their ally, the Equitist Advocacy group.

The disclaimer below addresses the issue of the ‘Hypotheticality’ of all entries to this blog, unless they are indicated to be deductive proofs, derived via explicitly stated axioms, or postulates, and their text(s) surrounded by ‘Proof-Assertion Brackets’... .

DISCLAIMER IV.:  We of F.E.D., and the anonymous members of the Equitist Advocacy group, are, indeed, seeking, advocating, and working for worldwide social revolution -- if only by non-violent, majoritarian, rule-of-law means -- in the sense of a profound change/expansion of human social-relations-of-social-reproduction ontology, including a change in the root social relation of production [Marx] of modern society, from the present [state-]capital/wage-labor/capital-equity-only social relation of production, to the social relation of production of ‘generalized equity’ -- the root of ‘Political-ECONOMIC DEMOCRACY’, or ‘Equitism’, implemented via the juridical establishment, and enforcement, of the three newly-discerned, fundamental human rights, of ‘Citizen Externality Equity’, ‘Citizen Birthright Equity’, & ‘Citizen Stewardship Equity’.

The original content that we generate, and post to this blog, e.g., in pursuit of the above-stated goals, consists entirely of our hypotheses, which you may regard as merely our personal opinions, except that we endeavor to present, here, only those opinions of ours that we believe to have scientific, and/or psychohistorical, utility.

What is the utility of a scientific hypothesis?

In exceptional cases, that utility is to grow from an hypothesis into a full-fledged scientific theory, e.g., through a progression of evidence-gathering and/or experiment which does not result in the falsification of the initial hypothesis.

Generally, however, the utility of an hypothesis is, e.g., via its evidentiary and/or experimental falsification, to lead the way to a better hypothesis, on the generally long road to theory full-fledged.

There are two exceptions to this general rule of scientific/psychohistorical ‘hypotheticality’ in this blog.

Exception #1 is the ‘ITINTO’ series, which is intended as “comic relief”.

Exception #2 is constituted by any texts that are surrounded/delimited by the Encyclopedia Dialectica special brackets for proof-assertion, as displayed and defined under (7) in the JPEG image pasted-in below, which validly assert a deductive proof of an explicitly-stated proposition, but only if each step of assertion is justified by an axiom and/or a postulate and/or a definition, and/or by another principle/rule of inference, of the system of propositions to which the ‘assertedly-proven’ proposition belongs [if proven], given that all of the axioms and/or of the postulates and/or of the definitions, and/or of the other principles/rules of inference, invoked in that proof, are explicitly given within the same blog-entry in which the proof is asserted. 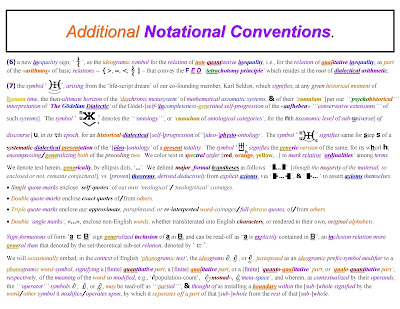